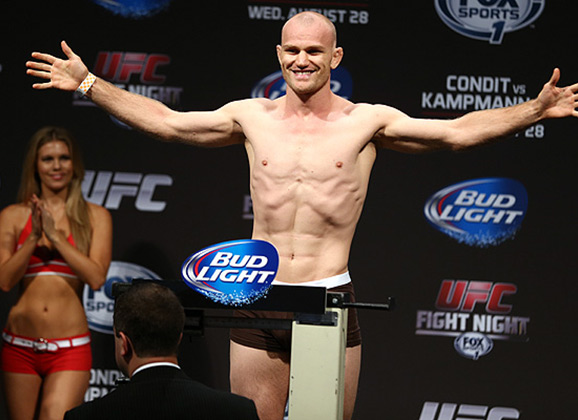 Nordic MMA Pioneer Martin Kampmann (20-7) can’t call himself the only Danish fighter to reach the UFC for much longer, as Nicolas Dalby recently signed his contract. “I’ll be looking forward to see him in action!” says the Hitman to MMAViking.com upon learning the news.

While it is still uncertain if Kampmann, who is now coaching Team Alpha Male, is still an active UFC fighter, there will be more than the 17 UFC fights by Danes in the near future as at least the Sharpshooter will tally fights in the Octagon.  The 32 year old Xtreme Couture fighter hasn’t fought since 2013, and has called his time away a “hiatus”.

“I’m glad to see some more Danes in the UFC, hopefully even more to come.” comments Kampmann who broke through in the UFC in his middleweight debut back in 2006 at UFC Fight Night 6 with a first round submission.  He has earned 5 “of the night” awards in his career, with such memorable bouts against Diego Sanchez, Thiago Alves, Drew McFedries, and Carlos Condit.

“He’s got a very entertaining style and is very capable.”

In addition to both coming from Denmark, the two also have the link of being Cage Warriors Champions before stepping into the Octagon. Kampmann captured the middleweight belt back in 2005 versus Matt Ewin and Dalby versus Sergei Churilov in 2014.

Dalby is expected to be in action for his debut this summer.