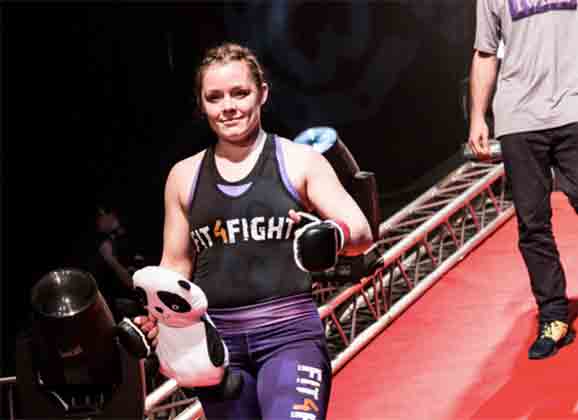 Anna Elmose (2-0, #4 ranked bantamweight) looks to take her young pro MMA career to the next level again with her latest booking against Dutch fighter Megan van Houtum (1-2).  The bout takes place at Odense Fight Night 3 in Denmark on April 25.  “Houtum is no doubt my strongest opponent yet. I know that I have to get good match ups to raise on the rankings.” says the Dane to MMAViking.com after the recent fight announcement.

In a week where Rumble Sports teammates Nicolas Dalby signed to the UFC and Pannie Kianzad to Invicta FC, “Panda” moves forward with another fight signed less than two weeks after stepping out of the cage. Elmose won by 2nd round TKO by punches against Team Alpha Germany Aitek Emadi at MMA Gladiators on March 15.

“I didn’t get injures during the last fight, my shape is good, so I want to get so many fights as possible and take all the opportunities there is to take fight that makes sense for me.”

Elmose has now stopped both of her opponents. Her pro debut was back in November at Cage Warriors 74, where she stopped Emma Delaney in just 19 seconds.

Houtom is out of Gracie Barra Netherlands and won her pro debut in 2012 over Hatice Ozyurt, before losing via a cut versus Alexandra Buch back in 2013 and to Kianzad by TKO in August of 2014.  Houtom is a dangerous decorated and dangerous grappler.  “I always try to prepare myself for a hard fight. She is very strong and I know her judo is great. I will fight her smart.” says Elmose about the new matchup.