MMA Viking is live in Stockholm for IRFA 4. At Solnahallen the capacity is 2,500 and this is local Nordic MMA as its best! 8 MMA fights tonight, including the headliner by Nordic’s top Bantamweight Sirwan Kakai versus Jose Luis Zapater. The card also features Swedes Carlos Prada, Oliver Enkamp, and Lina Eklund. 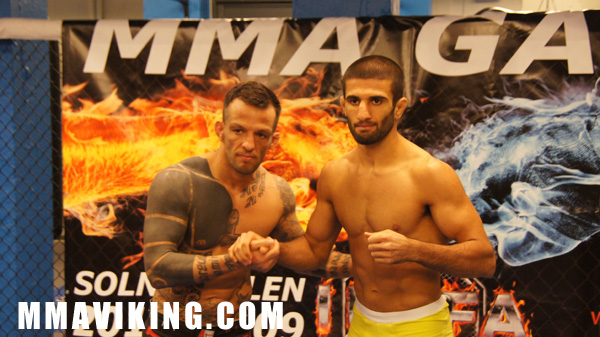 The event has started, in the “House of Pain” the announcer says. Looks like there are over 1,000 people here. The evening is starting off with a little dance routine from the local high school to get the night started. Swedes dancing to reggae/rap… what an international evening this will be.

Michael Tunc Versus Peter Borge (Amateur)
Tunc is the first fighter in the cage, but it is Borge that gets the crowd applauding. Borge is from the local Berserk fight camp, and Tunc is cornered by Swede Martin Svensson and fights out of Pancrase Gym. This is an amateur match, and will be 2 rounds for 5 minutes.

The two start out throwing hands, and it is Tunc that gets a big punch in to drop Borg. Tunc follows up with nasty ground and pound, and it is lights out for the amateur on his back. The bout is stopped with Tunc stopping the bout quickly in this first bout of the evening.

The announcer says that “Alexander Gustafsson is in the house”.  He also reminds us that the UFC that the UFC is coming this April.

Oliver Enkamp Versus Kari Päivinen
Round 1
Oliver Enkamp comes out to huge applause, as the future of MMA in Sweden could have arrived. The Finn scores an early takedown, and is raining down punches on Enkamp. The 21 year old Allstars fighter looks composed, but he is taking punches. The Finn looks to have a good wrestling game, and keeps the Swede on his back. Enkamp throws up his legs, and now looks for a take-down of his own. Oliver holds Päivinen against the cage, and takes him down…. looking for anaconda choke, and it is tight… but not tight enough. The finn is slick and takes Enkamps back, but he’s too high and Enkamp flips him over.

A wild round of back and forth, but an armbar is locked on and Enkamp looks to finish, but takes a punch… now he switches to a triangle for the finish, and Päivinen sits on his but to defend and it works. We have a fight folks, and this is no gimmie for the pro debut of Enkamp. The both acknowledge a good round, as we see the end of the first round for the first time tonight.

Round 2
A spinning backkick for the Swede that lands hard in the chest, but the Finn comes back with a double-leg, and again looks to impose his wrestling game. Enkamp sprawls and is now on top. The Swede is finding his rythme here and punching down on his opponent. Päivinen has an armbar locked on Enkamp counters, but it is tight. Now the Swede takes back control and takes the back of his opponent. Clear round 2 for Enkamp.

Round 3
“Oliver, Oliver, Oliver, Oliver” the crowd cheers to start the third. Enkamp looks fresh, and again goes for a high round-house kick. After a quick exchange, the Finn slams Enkamp to the matt, but Enkamp locks up a reverse triangle to end the bout.

Carlos Prada Versus Dawid Zywika
Allstars Carlos Prada was impressive in this bout, finishing with a TKO.

Round 1
Romanowski finds his way on top early, and has passed guard. Fouda looks a bit of his element on his back, as his corner urges him to his feet. After spinning through the Swede fighter is on top, but the bout quickly goes to the feet. While standing Fouda goes wild with arms, throwing punches with abandon. He looks to his corner for help on what to do as he is caught in a heal hook as the fight makes it way back to the ground.

The Swedish based fighter is again asking for help defending the submissions, and he is just fighting the hands on instinct.

The fight is on the feet again. Fouda goes for a kick, and his opponent responds. The crowd is into this one, and round 1 ends. Papy Makambo and Omar Bouiche race to the corner of Fouda who looks tired.

Round 2
A wild exchange again, but Romanowski finds himself on top. Fouda and Romanowski are standing, with leg kicks to be the most effective strikes between the two. Fouda looks tired, but regaining his power with the slower pace. Fouda switches stances every few seconds as he looks for an opening. Makambo urges action from his fighter, buand he does with a BIG left hand. Fouda goes for a left again, but it is met with a double-leg takedown and a ride to his back. Romanowski again on top in side mount.

Round 3
Romanowski looks the fresher of the two, and the pace of the standing is slowed with each fighter looking to pick his shot. Makambo is yelling instructions in French… and Fouda seems to be listning as he moves forward throwing kicks. Romanowski cathes Fouda with a big punch sending him to the mat, and the crowd goes wild as the flurry makes its way to the floor. The referee stands the fighters up, and it is the last chance for the Swede that lands a kick to the groin (or Romanowski reacts that way) then a follow-up kick from the Swede, which again is met with a double-leg take-down. Romanowski is still complaining about the groin shot, but the bout is over and in the hands of the judges.

Round 1
Both fighters look relaxed as them move around the cage. Eklund moves forward, and Juskiewicz looks to counter. A large Polish crowd is in the house, and “the little torpedo” gets a big pop from the crowd. Eklund looks for a takedown, but it isn’t there. Eklund like a bull, moves forward. Nice jab from Eklund lands. Good left counter from Juskiewicz, and Juskiewicz urges Eklund to come forward. Nice little chess match here early on. Eklund with a takedown, and pus the Polish fighter on her back. The Swede tries to land with little hammer fists, but not much is there. The former gymnast finishes the bout with mounting her opponent, and staying on top.

Round 2
Eklund tries kicks to start round 2. Juskiewicz still looking to counter as she moves lateraly. Eklund lands a good right hand, but the tide seems to be turning. Nicely timed take-down for Eklund, in what seems to be a replay of round 1. Eklund has moved to side mount, and looks to damage with knees to the body. Again, and again. Now in full mount, Eklund is pounding away on her opponent. Looking for an armbard to finish the round, Eklund finishes what could be her best round of her career.

Round 3
Eklund looks confident with eyes wide open, looking at her opponent… urging the action. The two tie-up against the cage, and Eklund looks for knees. Eklund secures a front headlock, and looks for knees. The two roll around, and it’s Eklund that takes control with a double-leg and puts Juskiewicz on her back. Odd standup late, as Aklund was on top looking for damage. Again, it’s Eklund looking for the take-down, and she has side mount, and mount… and looking to end the fight with punches. Dominant for Eklund.

Sirwan Kakai Versus Jose Luis Zapater
Kakai enters the ring last, and gains most of the applause.

Round 1
Zapater moves forward, but it is Kakai with a strong leg kick early. A nice left hand by Kakai, and he looks quick on his feet… using movement laterally. Zohan with another kick, and he now defends a take-down against the cage. A knee for Kakai breaks up the tie-up, and the two are back in the middle of the cage. The Swede winds up with a big upper cut, and now a knee… Zapater desperate looks for a takedown, but Kakai sprawls. High-level match here. The fight is again in the feet, and Kakai looks sharp… his timing is there.

Another low right kcik, and left knee to the body. A right knee, and the Swede is showing why is the top Nordic bantamweight. Another huge right kick. Zapater looks for a take-down, and Kakai spins around taking back. The two stand up, and knees again from Kakai to the body… left and a right. Tintin lands a huge left hand that reminds the Swede that he is still in a fight. Big round for Kakai.

Round 2
Right kick again for Kakai, and Round 3 looks like he’s already been in a war. Kakai is fresh, and uses his left to gage the distance. Again, Zapater dives for a take-down, but Kakai has spent too much time with top wrestlers at ATT to feel any threat. Assan N’Jie is in Kakai’s corner, and the pace has slowed here. Kakai is on top, letting a few punches go, but now significant damage. Kakai is frustrated as Zapater isn’t wanting to engage, and Kakai decides to try his submission attack taking his back. Second round is starting to end, and someone with an iPad jumps in front to try and record the match. The round ends, with Kakai still in charge.

Round 3
The nastiest kick of the night lands, with sweat flying off of the Spaniards leg. Kakai looks to take advantage of the situation and goes in for a double-leg, but Tintin looks for a guillotine. The Swede defends, and finds himself on top.

A right, left, right knee combination. And more knees form Kakai… dropping Tintin. The referee steps in to stop the bout. TKO for Kakai to end the night.