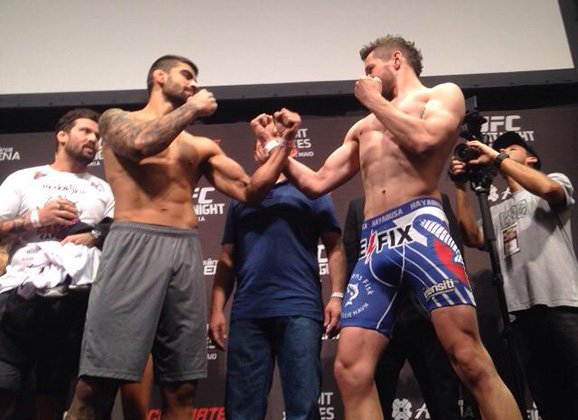 Dane Nicolas Dalby will face Brazilian Elizeu Zaleski at the Goiania Arena in Brazil. MMAViking.com will post live play-by-play of the scheduled 3 round welterweight bout versus Elizeu Zaleski dos Santos.

Round 1 : The fighters take to the cage, and Dalby appears energetic as he paces to and fro. Tonight, he puts his undefeated record on the line on the biggest MMA stage of all time. Dalby opens up with a leg kick to the inside, and takes the outside cage position. Dos Santos works the jab, but doesn’t connect in any solid fashion. Dalby again with a leg kick to the inside. Dos Santos throws a left, then a right hook and they connect. The Brazilian throws an overhand right, and Dalby swoops in with a beautiful blast double. Dos Santos controlling the posture of Dalby on the ground, and the ref stands them up. Dalby throws a jab to mask a kick to the body then circles and again kicks to the leg. Dos Santos eats another kick to the body, then throws one of his own, which misses. The Brazilian attempts a spinning heel kick, but he telegraphs his intent and Dalby ducks under for another takedown. Dos Santos uses his butterfly guard to get back to his feet, and runs to the cage. Dalby wraps his arms around him and throws him to the mat with a rather ugly throw. Dalby ends the round atop Dos Santos.

Round 2: Dos Santos comes out with a right hand that catches Dalby, and blitzes forward. Another huge overhand right is thrown, but it doesn’t connect, and Dalby counters with a kick. Dos Santos lands a solid kick to the body, then the leg. A left hook lands for Dos Santos, then Dalby shoots in for a takedown. He dumps Dos Santos, but the Brazilian gets right back up. Dalby is breathing hard, but his performance appears unaffected. Dalby takes Dos Santos down once more, but the Brazilian doesn’t stay there. They break away from the cage and Dos Santos attempts a jump spinning inside crescent kick that lands on the arm of Dalby. Dalby grabs a hold of Dos Santos  and pshes him to the cage. The Dane throws a knee, but it inadvertently strikes the groin and the action is paused. Upon resumption Dalby throws a right hand, angles off and strikes again, but Dos Santos catches him with a left. Dos Santos attempts an overhand right, and Dalby once more changes levels and takes him to the mat as the round ends.

Round 3: The final stanza opens with an overhand right for Dos Santos, and as Dalby clinches, the Brazilian rams him with a knee to the body. Dalby disengages, then attempts to clinch again, but the Brazilian smashes him with another knee to the body. Dalby misses with a kick and Dos Santos attempts to move forward, but the defense of Dalby is strong and he avoids the strikes. Dalby attempts a clinch, but Dos Santos won’t have it, and shoves him off. An uppercut opens a combination for Dos Santos, and Dalby finds himself clinched and eating solid knees to the body. Dalby attempts a takedown on the break, but ends up with a body lock against the cage as he takes Dos Santos’ back. Dalby executes a throw and ends up on top, but Dos Santos attempts a Kimura and uses it to transition to the top position. Dalby escapes to his feet and hits Dos Santos with a headkick. Dos Santos throws a last punch that lands on the elbow of Dalby as the bout ends.

After three rounds, we head to a decision and your Winner by way of Split Decision is determined to be the still-undefeated Nicolas Dalby.