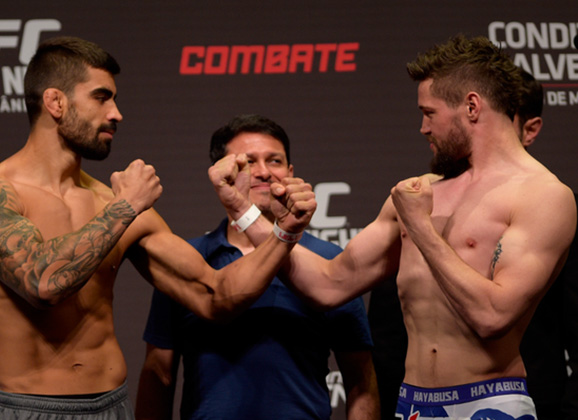 It was a big night for Rumble Sport’s Nicolas Dalby who stepped into enemy territory and found himself in a 15 minute war with Brazilian Elizeu Zaleski Dos Santos. In the end it was a 29-28, 28-29, and 29-28 split decision victory for Dane who used striking at a distance and take-downs when needed to secure the victory.

Dalby showed everyone early that take-downs were a key part of his gameplan. The welterweight in his first round of his UFC debut got the slugger to the mat with a perfectly timed double-leg takedown. The Sharpshooter was able to secure 6 take-downs in all, and was on top and in control in each round and spent over 4 minutes on top.

It was clear that the Nordic fighter was in control of the scorecards with his early success, and even Capoeira’s coaches told him that he was down, losing both of the first two frames. The Jungle Fight champion had his best round in the third, landing solid knees and working toward a kimura.

The Cage Warrior champ showed that his cardio was on point as he battled off his back late in the fight, after being reversed on the ground.

With the win at the Goiania Arena, Dalby moves to an impressive 14 wins and 0 losses. Dos Santos drops to 14 wins and 5 losses, and has his 4 fight winning streak snapped.

Dalby becomes on the second Dane to claim a win in the Octagon, and first since 2012 where Martin Kampmann stopped Jake Ellenberger.