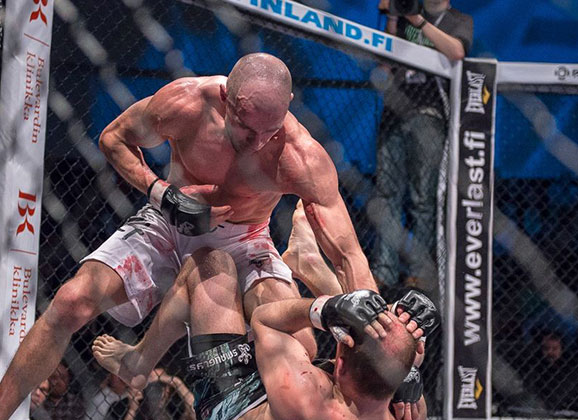 CAGE 29 goes down tonight at the Culture House of Helsinki. MMAViking.com is reporting cageside, and you can see live results here, plus photos and video interviews shortly after the bouts.

Pro MMA: -93 kg
Saku Heikkola (3-5-0, 1 No Contest) Valkeakosken Heracles vs. Matej Surin (4-1-1) Slovakia
Round 1 – The first round of the evenings first bout starts out with the two fighters throwing hard swings with Surin being the more aggressive fighter, Heikkola then gets a good take down and from his top position starts to work with punches and landing hard elbows that opens up Surin, causing the referee to stop the fight before the first round is over.

Winner by TKO in first round, Saku Heikkola

Pro MMA: -70,3 kg
Niko Myllynen (3-2-0) RNC Sport Club vs Kevin Ruart (2-1-0) Switzerland
Round 1 – The two fighters start out a bit slow with some punches going both ways but with Myllynen in charge. Ruart gets a good takedown and almost secures a darce-choke but Myllynen escapes it and takes back the command in the fight with a good punch rocking Ruart a bit. The two clinch and then moves around until the time runs out.

Round 2 – Myllynen takes command direct in the second round working with both kicks and knees from clinch. Ruart goes for a takedown but it’s Myllynen who gets the better position and tries to work with punches. Ruart then makes it to his feet only to get hit by Myllynen that then keeps on attacking and forcing the referee to stop it at 4.30 making Myllynen the winner by TKO.

Pro MMA: -56,7 kg
Suvi Salmimies (2-0-1) Team East Front vs. Karla Benitez (10-7-0, 1 No Contest) Spain
Round 1 – The round starts out with Benitez in the center of the cage with Salmimies moving in and out using different combos and Benitez responding with the same. The first round ends with Benitez in a top sideposition after a nice hipthrow.

Round 2 – The second round starts out more aggressive with both fighters throwing and taking some punches. After some short clinch fighting up against the cage the fight moves back to the center of the cage, where after some short punch exchanges the time runs out.

Round 3 – Last round of the only female bout of the evening starts out like the previous two but with Salmimies being more aggressive, to the point where Benitez starts to grab the fence after Salmimies got to her back working on a takedown, the referee stops the time and gives Benitez a one point deduction. The round ends with the two fighters cliched up against the cage working with knees, leaving it in the hands of the judges.

Pro MMA: -77,1 kg
Jussi Halonen (4-3-0) Hardknocks Helsinki vs. Laurent Beranger (4-2-0) France
Round 1 – Both fighters start out with nice combos of punches and body kicks but it’s Halonen that lands a hard lefthook sending Beranger to the canvas and follows it up with a few punches before the referee breaks it up ending the fight in the first round.

Pro MMA: -70,3 kg
Aleksi Nurminen (3-1-0) RNC Sport Club vs. Jonathan Ramon (6-7-0) France
Round 1 – The bout kicks of with Nurminen landing in Ramons full-guard before he stands up and tries to get at Ramon. Leading his way with a hard punch Nurminen then mounts Ramon and using hard elbows he wins by a TKO at 1.38. After the referee stop the fight Nurminen jumps out of the cage to celebrate with his very loud and passionate fans in the stands.

Winner by TKO at 1.38 Aleksi Nurminen.

Pro MMA: -77,1 kg
Mikko Ahmala (4-2-0) HardKnocks Helsinki vs. Julien Piednoir (4-1-0) France
Round 1 – The two fighters clinch up and Piednoir gets a beautiful takedown but it’s Ahmala who makes his way to a heel-hook that Piednoir rolls out of but it lands him in a knee-bar that he also escapes from. He then takes Ahmala’s back and starts to work on a rear-naked-choke. Ahmala works his way out of the choke and takes Piednoir’s back, where he stays working with punches until the time runs out.

Round 2 – The second round starts out with Ahmala taking the command but he gets poked in the eye causing the referee to stop the time in order for him to recover. The round starts again with Piednoir getting a double-leg takedown earning him a dominant side-position. Ahmala tries to work his way out but Piednoir lands on his back throwing heavy punches. Ahmala gets back up only to get taken back down again, at 4.08 Ahmala taps-out due to a rear-naked-choke.

Winner by submission (Rear Naked Choke) at 4.08 in round 2, Julien Piednoir.

Pro MMA: -70,3 kg
Mikael Nyyssönen (7-0-0) MMA Team 300 vs. Thibault Gouti (9-0-0) France
Round 1 – After a short punch exchange Nyyssonen goes down for Gouti’s legs and gets his head stuck, Gouti then gets a dominant side position and starts landing some heavy punches that knocks Nyyssonen out.

Winner in the first round by KO at 0.53, Thibault Gouti.

Pro MMA: -120,2 kg
Marcus Vänttinen (24-5-0) HardKnocks Helsinki vs. Jarjis Danho (4-0-0, 1 No Contest) Syyria
Round 1 – The evenings only heavyweight bout kicks of in a furious tempo, with a lot of clinch and wrestling work. Vanttinen gets some nice takedowns with him landing on top landing a few punches and elbows. The two fighters get back up and work against the cage until the time runs out.

Round 2 – The second rounds starts of and the fighters goes up the cage again for a bit where Danho gets some punches to the face of Vanttinen, Danho keeps landing heavy strikes to the head of Vanttinen who manages to stay on his feet and get away. The two tired fighters clinch up against the cage where Danho again manages to land some really heavy strikes that makes some damage to Vanttinen who yet again manages to stay on his feet until the time runs out.

Round 3 – This last round starts the same with the fighters clinching up against the cage and Danho lands some strikes to Vanttinens head, Danho keeps the momentum and finishes it with punches until the referee steps in.

Pro MMA: -70,3 kg
Anton Kuivanen (20-8-0) Primus Fight Team vs. Sergej Grecicho (20-5-1) Lithuania
Round 1 – The last bout of the evening starts with the fighters moving around a lot before they land on the canvas with Grecicho in Kuivanens full-guard, the referee stands them up and Kuivanen knocks Grecicho down but he gets back up. Nothing really happens after that but it’s Kuivanen who is in charge the entire round.

Round 2 – The second round starts where the first one ended, still Kuivanen in charge using good movement and throwing good combos of kicks and strikes and defending against takedowns. Grecicho gets a takedown and moves from top to standing until Kuivanen pulls him back down to his full-guard and then stands back up again. Before the round ends KUivanen lands a nice and loud strike.

Round 3 – In the last round Grecicho comes out more aggressive and tries to take command but Kuivanen has no problem to take bake controll, a few elbows from Kuivanen cuts Grecicho up and the referee stops the time for a quick medical exam. Grecicho keeps trying for his single leg takedown but Kuivanen defends perfectly and stands back up before the time runs out leaving it to the judges scoring cards.