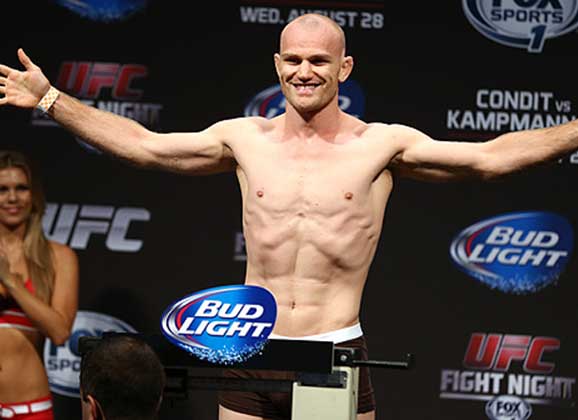 Martin Kampmann is making the most of the opportunities presented to him as he comes closer to the end of the career in the cage. While the Hitman was collecting Fight of the Night bonuses when he was busy with climbing the welterweight division with exciting bouts with Thiago Alves and Diego Sanchez, he is now cashing in outside of it. He recently took home a $50,000 check from winning a poker tournament in Reno.

The Dane is now taking his card playing expertise to the ultimate event as he enters the World Series of Poker (WSOP). The fighter is battling on the green felt in multi-day tournaments instead of inside the Octagon.

Hear Kampmann talk about his expertise in this interview.

With the departure of Duane Ludwig from Alpha Male, it has also opened up more coaching opportunities to Kampmann who has been developing his own system to transfer all of his striking and grappling knowledge. The Dane was in the corner of Urijah Faber this past weekend, as he headlined the prelim card of UFC 175. The Xtreme Couture fighter has spent his last 6 weeks in Sacramento helping the fighters, while not officially announced as the Alpha Male coach, is filling the void of Bang’s departure to Colorado.

Stay tuned for more on the Hitman as he develops his poker and coaching skills, and could make a return to the cage.