Novus Academy fighter Ole Magnor (1-4) took on the local hyped fighter in Justin Burlinson (1-0) for an opportunity for a big upset at Olympus Fighting Championships in England Saturday night.  “Well it was a war. A lot of knees, allows, rights, submission tries from both of us” says Magnor to MMA Viking.

Ultimately it was a third round loss, due to a guillotine in the third round. “They say it was a great fight. But I need too see it again when it is out.”

The Norwegian has been facing hyped local fighters recently.  His last bout was against Sweden’s 2016 IMMAF World Championships bronze medal winner Rostem Akman in Stockholm at Superior Challenge 15, and in this bout took on what the promotors called the “highly anticipated professional debut of the number 1 ranked amateur middleweight in the UK.”

“I almost finished him in the first with a straight right and had a rnc on him in the second round. So it was a close war.” 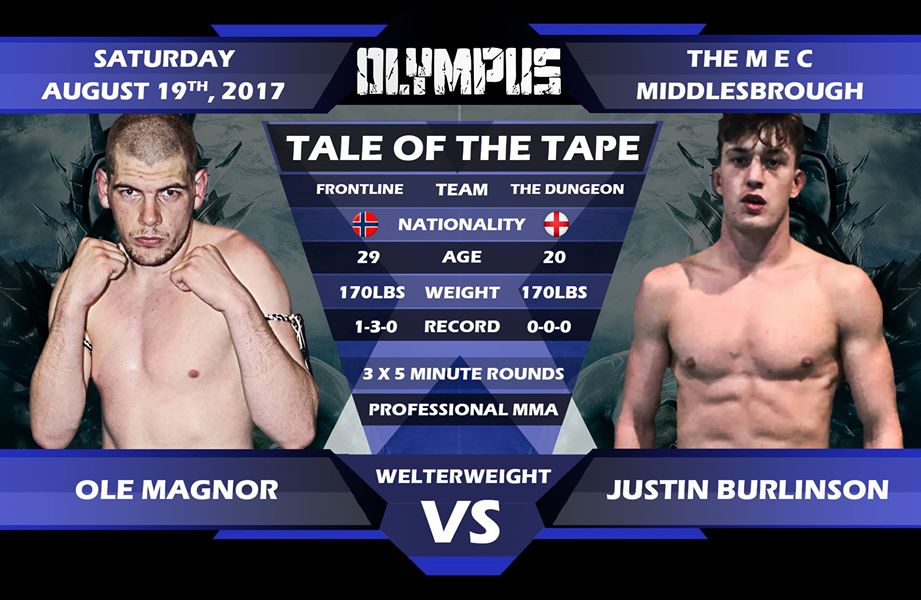 “I owe John Olav Einemo a lot.  He was awesome in the corner and to help me with a bad weight cut.” says the former welterweight.  “It was a bad weight cut. It’s was the hardest cut I ever had. 11 kg since Sunday.  I felt tired after the first and think hard now about going up too 84 kg or 80 kg (perfect) if that comes.”