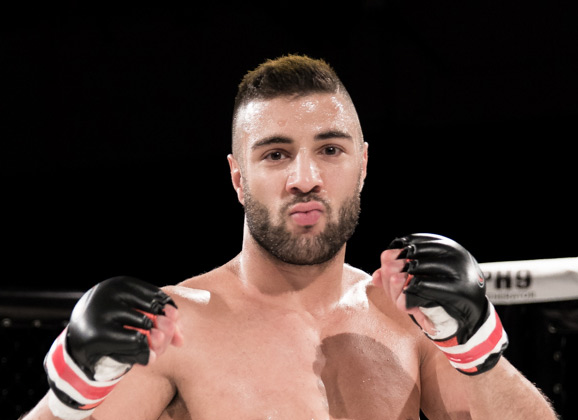 David Teymur (3-1) took on Polish stand-out Marcin Wrzosek (10-2). Though Teymur has only had 4 professional fights, he assured the camera he would be the most high-level fighter Wrzosek has faced. Here’s how it went down last episode when the cage door swung closed:

The fight begins and Wrzosek opens with a leg kick as the two reach the center of the cage. He throws another, then Teymur powers forward and returns. Teymur fires to the body. Wrzosek unleashes two overhand rights onto the glove of the Swede, who fires back with a kick to the body. The two clash, exchanging right hands, then Teymur hits Wrzosek with a body kick. It’s returned by Wrzosek, so Teymur peppers him with a leg kick. Wrzosek lands a solid right hand and puts Teymur on the mat. He instantly goes to work with short punches from side control. Teymur eventually shakes him off and returns to his feet. As Wrzosek is resetting, Teymur blasts him with a double leg, and now the Polish fighter is on the bottom. Teymur pushes Wrzosek to the fence, and sends a knee to the Pole’s stomach as he climbs the cage. The two reset and Teymur hits Wrzosek with a push kick, then a high kick to the head which is caught, and he is taken down. He regains his feet, then eats a kick to the body. Wrzosek hits him with two consecutive right hands to follow up.

Round two begins and the two touch gloves. Wrzosek takes the center early and throws a body kick, caught by Teymur, then launches a flurry. The two separate and Teymur throws a kick to the head of the Polish fighter. Teymur then takes him down once more. They scramble, and Teymur sinks in a guillotine choke, but loses it and ends up with Wrzosek in side control. Wrzosek passes to mount, but is unable to maintain it, and soon finds himself in Teymur’s half guard, raining shots to Teymur’s stomach. Teymur sweeps him, ends up in guard, looking for a pass to the left. Wrzosek is staying busy on the bottom, but Teymur lands two solid lefts before they are stood up. The two swing wildly and both connect before Teymur attempts a takedown, fails and pulls guard. He viciously peppers the side of Wrzosek’s head with elbows, then struggles to his feet. Wrzosek lands a right hand, and Teymur counters with a leg kick. Teymur throws and overhand right, then is blitzed to the cage by Wrzosek with a left-right combo. Solid knees from Teymur, but the two break, and Wrzosek scores a takedown to end the round.

There is no third round. The judges declare the winner by majority decision Marcin Wrzosek.

Teymour will not proceed to the semi-finals which will be shown on TV Wednesday, and with both Martin Svensson’s injury and Frantz Slioa loss, all three from Sweden are out of the running for The Ultimate Fighter season 22.

However, any of the three Swedes in theory could have a bout on the TUF Finale in Las Vegas on Thursday. Stay tuned as MMAViking.com will be live to report on the event!