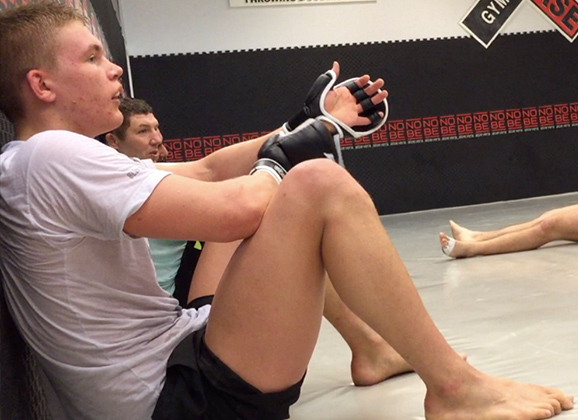 Undefeated Oliver Enkamp (4-0) has been training at a high level and ready for a breakout on TUFF 22 season, but 2015 didn’t end up as planned. “I injured my knee so I couldn’t straighten out my leg for 2 weeks and I thought it’s not a good idea to go there and make a bad first impression cause I wanna be healed up and my first impression with the UFC is very important to me.” says the Swede to MMAViking.com in a recent training session at Pancrase Gym.

“I had a problem with injuries before my trip and I was actually injured when I was at the try outs so I was kind of scared of what they were going to put us through. Since that it was only 90 seconds of grappling and less than a minute of pad work I managed to do that.” says Enkamp, who withdrew from reality TV show, making room for Martin Svensson to step in on short notice.

“I’m on the same side as Gunnar Nelson on this point, I know he’s been talking about the weight cuts and how it effects fighters and I don’t think it has anything to do with fighting.” says Enkamp that has fought at welterweight, until his recent focus on trying to get down to lightweight. “To me cutting a lot of weight is a sign of insecurity because you wanna be the bigger guy, sort of bullying and picking on smaller fighters.

“I’ve always drawn inspiration from different fighters, different martial arts.” says the Pancrase MMA fighter about his style. “If i would give credit to one coach I would say Omar (Bouiche) most, cause it’s his style i’ve been trying to imitate a bit and adding my own feeling to it. I think he is a very complete MMA fighter, he got the whole game.”

Check out the whole video here.