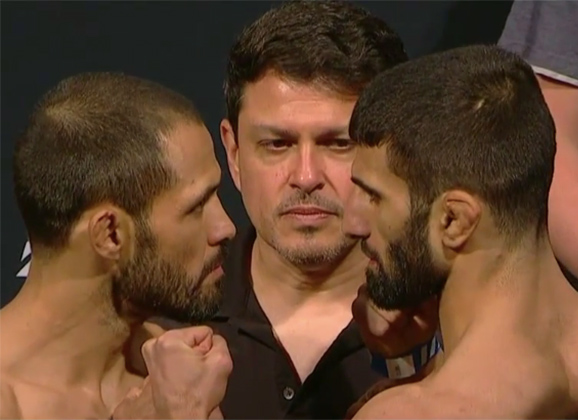 Round 1
Both fighters on the feet, and it is leg kick exchanges to start. Kick to the body for Saenz, and the American with a combo and kick. Clinch with knees for Saenz, and Kakai for a takedown, but Saenz won’t have it.

Kakai gets a double leg take-down half way through the round. Back to the feet, and Saenz landing good knees to the body. The GBG MMA fighter with a counter left hook, off a right over the top.

Saenz finishes the round with another knee to the body and goes for a single-leg takedown. Close first round.

Now Kakai is on top with a take-down, but only for a bit. Elbow from Saenz lands on the way up. Another close round.

Might have to eat my words a bit. Got it 19-19, but Kakai clearly won the second behind a crispy jab. ATT has him looking very much improved

Round 3
Saenz lands knees and an elbow into the last round. Nice take-down from Saenze and he is on top with an elbow. Kakai gives up his back, and Saenz jumps to lock on a rear-naked choke, but can’t get it. The Swede now on his feet, and defends another take-down.

Saenz looks to land an uppercut, and time running out. Kakai gets a takedown for just a second, but Saenz is up and lands an elbow. Counter wrestling for Kakai that looks for a take-down of his own. Saenze throws a push kick to end the fight.

Brb, rewriting the recap I'd already started under the assumption that Kakai won that fight…

“No excuses, the judges didn’t see me as the winner. I will be back stronger and I know where I am heading. Thank you all for the support!” says Kakai after the bout.