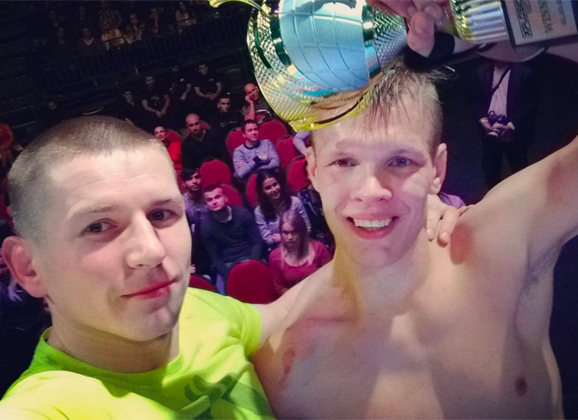 Estonian Sten Saaremäe won his pro debut at Explosion Fight Series last night over Renatas Buskus. “It felt amazing, I’m so happy!” says the 25 year old to MMAViking.com shortly after the bout in Tallinn at the Saku Suurhall.

The entertaining featherweight that had his amateur MMA debut back in 2011 dropped his opponent twice with strikes and tried to finish early, but it wasn’t until nasty elbows to the head forced a tap in the third round. “A faster finish would be better, but we did our work. Theres a lot to improve, but next time I fix my mistakes and be better.”

Alar Hutrov also got a win in his pro debut. The Estonian won by unanimous decision against late replacement Mantas Selvenis from Lithuania.

Both fighters have long competed in amateurs in 3D Liiga and the RAJU promotion. A big night for Estonia with two locally grown fighters turning pro and getting wins.