“Myself and the team will bring home the belt.”

Victor Cheng (6-1-0) will look to make the most of his 6th appearance at The Zone FC with his first title shot against Eric Cebarac (8-4-0) on May 7th’s “Unbreakable”. 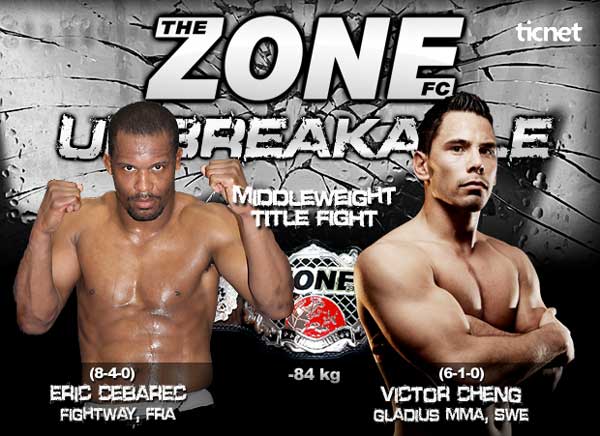 The Zone FC announced that the middleweight belt will be left vacant by injured August Wallén of Gladius MMA, making way for student Cheng to fight Cebarac for the unclaimed title.

“He is my head coach and look up to him as a fighter. Myself and the team will bring home the belt. That is how it will go down.” says Cheng about the prominent Wallén.

The veteran Cebarac is coming off a first round doctor stoppage at February’s Fighter Gala 18, and the Frenchman will be looking to make it three victories in a row with a win over Cheng. “I think he is a great fighter and he can make some problems for me, but I am ready” says the Swede about his opponent.

Cheng, who has never gone the distance, will look to extend his winning streak to six his in hometown of Gothenburg.