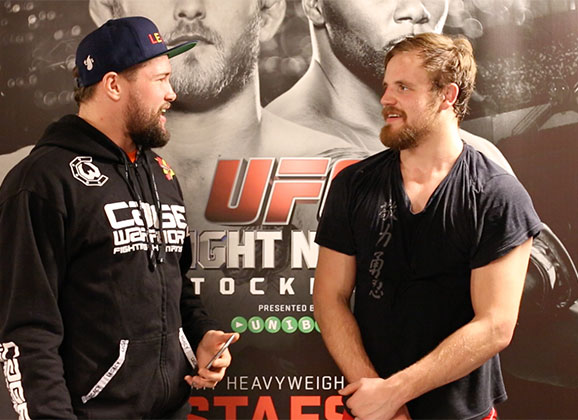 Gunnar Nelson was at Rumble Sports in Denmark for a seminar and to bring awareness to the big upcoming UFC in Sweden card.  MMAViking.com asked the gym’s most known fighter and current Cage Warriors champion Nicolas Dalby to talk to the visiting UFC fighter from Iceland.

“I think it was a success… people seemed to like the material and what we taught” says Gunni, who was joined with former UFC title contender and current commentator Dan Hardy.

“I will definitely be there” says Nelson when asked about attending the big January 24th event at the Tele2 Arena headlined by Alexander Gustafsson versus Anthony Johnson.  “There are some pretty good fights on the card.” continues Gunni, who is coming off his first loss of his career versus Rick Story, which took place at the Ericsson Globe Arena, which is next door to the new 30,000 seat arena that will play host to the 4th UFC in Sweden.

“I always enjoy watching Alex fight.  Every time he fights… I’m on my toes.” – Nelson

Dalby asks Nelson to go back in time and remember his pro debut in May of 2007 that also took place in Copenhagen. “It got me hooked on MMA” says Gunni about the Adrenaline 1 fight, where he fought to a draw against local John Olesen.  “It was a good back and forth battle.”

“I liked Dan Hardy’s ideas and the way he moved on his feet and I think you can even add that into your grappling.” says Nelson, who also left the seminar with a few new tricks to tryout as he looks for a return to the cage in early 2015.

Thanks to Nicolas Dalby for taking the time to set up the interview and do his best to record it in the noisy surroundings.