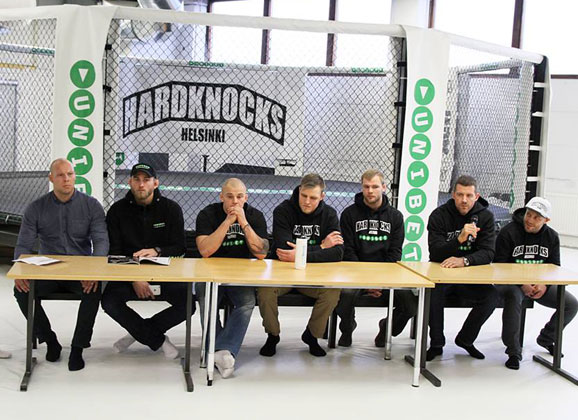 Dating back to 2011, the UFC has had its eye on Helsinki, but has never put on an event. “Finland is a key country for us, with great athletes and fans, and is firmly on our list for the future.” Garry Cook, UFC Executive Vice President told MMAViking.com back in July, as there was a proposal for an October date at the Hartwall Arena in Helsinki.

Now, during the recent press conference to officially launch the HardKnocks Helsinki fight team, Oscar Eklöf who is the spokesperson for the businessmen trying to bring UFC to Finland, updated the media about progress with talks with Zuffa.

“The UFC organization has given a clear message to us: Finnish fighters need to be more successful, so the sport will grow and arouse more interest in the country.” – Eklöf

The new fight team based in Helsinki has its core with coach Jaakko Dahlbacka and athletes Marcus and Johan Vänttinen and Jussi Halonen. Unibet is sponsoring this HardKnocks Helsinki team and the only Finnish male in the UFC, Tom Niinimäki, to help support taking Finnish MMA to the next level. “I believe this team will bring that success, and we will get UFC to Finland.”