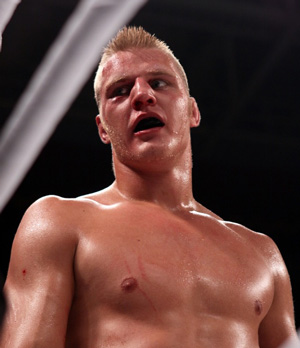 Marcus “Caveman” Vänttinen is currently Finland’s number one lightheavyweight and among the top 5 in the Nordics. Big and strong Finn is an experienced pro fighter despite being just 26 years old. Vänttinen has been fighting nearly a decade now and battled nearly thirty times already. Couple of last years have been a bit rocky for the Finn who has had to deal with injuries and underachieving performances in the cage. The Finn has now fully recovered from a knee surgery and after tuning his training regime, it was clear at his latest fight at Cage 22 that “Caveman” is back in business: the business of mauling his foes. Physically fierce Vänttinen put a beating on Frenchman Boubabar Balde before submitting him with a rear naked choke in the second round. Vänttinen is a modern day allrounder who can strike and clinch fight on the feet and grapple on the ground. The Finn, who cuts from well over 100 kilos (225 pounds) and towers at 193 cm (6’4″), is a big lad for the weight class.

Denmark’s Joachim Christensen’s MMA game is very much based on his strong background in BJJ. Christensen has been training, coaching and competing in BJJ for a decade and holds a black belt in the art. In MMA Christensen, who fought for the first time in 2007, has slowly increased the pace. In 2012 the Dane fought three times and went 2-1. Experienced Maxim Grishin of Russia was a bit too much for Christensen when they fought at M-1 in May of 2012. Christensen took his biggest win in his last fight at Royal Arena 2 where he outgrappled Swede Matti Mäkelä and was awarded a decision after uneventful three rounds. Christensen’s strengths are definitely his technically sounds grappling and sizeable gas tank. The Dane’s striking is limited, mostly just short punches and knees in the clinch.

Summary: Christensen’s strong tendency to grapple will set the tone for this fight. The Dane will probably try to clinch as much as possible and Vänttinen might be ok with that as the Finn has a strong clinch game of his own. If Christensen can score takedowns and make Vänttinen carry his weight, the fight could to the Dane’s favor later on. Overall Vänttinen has a wider skill set and that should give him more options on how to approach this match up. On the feet the Finn holds the advantage with his strong kicks and aggressive clinch work.