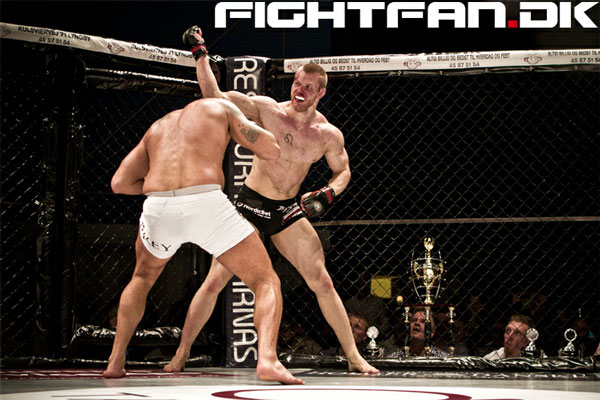 Emil Weber Meek stepped into the cage for his first professional bout at Fightergalla 25.  The undefeated Norwegian fighter made the tough weight cut to welterweight and looked good as he stepped in the cage to face Malmo Muay Thai’s Mohammad Abdallah, but a broken arm during an early exchange in bout changed the course in the bout… an experience that Meek won’t soon forget.

MMA Viking talks to MMA Trondheim athlete a little more than a week after his TKO loss in the first round at Fightergalla 25 in Denmark, and the good humored says “things have been running a little slow here lately cause of my arm!”  See the interview below:

MMA Viking : I know you broke your arm very early in the fight. Was this during the initial ground-and-pound? Did you know it was broken, and what went through your head?
Meek : While releasing a fury of hammer fists I must have hit his head or elbow with a strange angle. The arm was broken, I did not notice but my body did, as you see i’m swinging hooks, and backhands with just my left hand!

MMA Viking : How hard was the weight cut, and how did it impact you during the fight?
Meek : The weight cut was very hard on me this time! I’m still trying new ways to do things and sometimes it fails and you run out of time! Luckly i made weight, 77.0 spot on as always! When i walked in to the cage i weighed about 85.5 kg’s.  But like i said, i learn from my mistakes so i’m always improving!

I felt rehydrated and fresh, but i broke my arm early, and your body looses allot of energy to stimulate the pain with all the endorfins beein released in your body!

MMA Viking : What did you learn the most from this fight?
Meek : Well… As always I need to be more calm. Use my time wisely in the cage.  But a very important lesson for me was that pro MMA has very small marginals. The slightest mistake can cost you to fight!

I have to say that it relieving to both have had my first pro match and my first loss in my career! My shoulders feels lighter and my mind is free!  It can only get better from here!

Meek is the first fight in this video

MMA Viking : Sherdog is showing that you had a previous professional fight? I thought this was your first?
Meek : I was fighting a Pro fighter in England once because they could not find any semi pro fighters who wanted to face me. We “ruled it down” to no elbows and no knees to the head, but all else was pro wtih small gloves, no shins, gnp an 3×5 minutes! After that fight I’ve had to semi pro fights in england and 1 semi pro in Denmark!

So my last fight with Mohammed Abdallah in Fighergalla 25 was my first official pro fight!

MMA Viking : Do you have a recovery timeline mapped out? How soon do you want to try and return?
I’m having surgery next week. So i don’t know to much right now, but i’m hoping to get back fulltime again within 6-8 weeks! Until then Diablo 3, bicycling, jabbing, kicking, shrimping and fotwork will be my focus!

MMA Viking : What training partners, sponsors, or others would you like to thank?
Meek : A huge thanks to everyone who has trained with me and helped me get better!

The guys at MMA Trondheim who was training in shifts so there would always be good sparring for me!
Trondheim BJJ for exelent grappling!
Trym Boxing club for of course boxing!
And Frontline Academy ProTeam who is always welcoming me with open arms everytime i go there!
Of course  would not be able to go 100% if it had not been for my sponsors

I owe you all!

Hope you enjoyed my fight! Win or loose I gave it all!