Norway based Håkon Foss took on Romanian Pascu Ion in Southend, England this Saturday night at UWC 23. Ultimately, it was the more experienced Ion that was able to capitalize with his punching power after Foss began to find his range with kicks. Read the play-by-play of the fight below.

Foss comes out first to the cage and looks calm and confident as he awaits Ion.

Round 1
After trying a few high-kicks to start off the bout, the much taller foss takes few powerful punches from the stocky Romanian that would have put lesser men out. T

he Norway based fighter is able to shake off the punches, and looks to move forward on the fight… and tries a capoeira-like head-kick, but it is off the mark.

Ion is able to get the bout to the mat with a throw and takes control of the Nordic fighter. The referee stands up the fighters and with a couple minutes left in round 1, and the two begin to strike again. Foss is in a traditional stance and tries to use his reach to his advantage, and he lunges for a double-leg take-down, but Ion sprawls and tries to spin behind before the position in neutralized and they both stand-up again.

Foss is pressing the action, and doesn’t seem to be fazed by Romanian power and counter-wrestling. A nice right kick to the body from Foss toward the end of the round in one of the best shots of the night as the Sweden-raised fighter is now finding his range. Bellator fighter and training partner Jack Hermansson from Frontline is in the corner of Foss, as they both stay standing during the break between rounds. 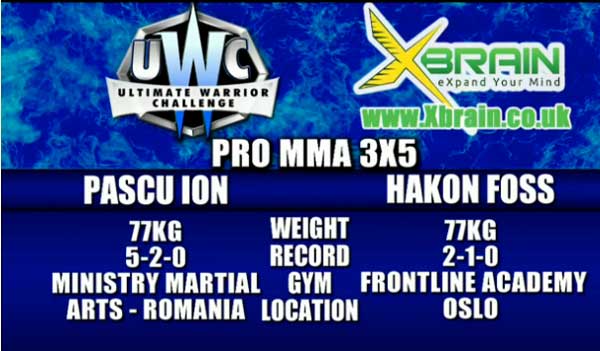 The Frontline Academy fighter goes for a take-down, but can’t get it. Ion seems to tired, and tries another throw but ends up crashing on his back. Submission attempt form Foss, but the guillotine isn’t tight enough and it’s back to the feet again.

After some attempted strikes by Foss, Ion huge right hand lands on Foss… and after a slight delay, Foss crumbles to the mat and the fight is over.  Foss looks to be hurt by the blow that leaves the Norwegian’s face bloodied.  The fight is over mid-way in round 2 due to a TKO stoppage by the referee.

Ion wins to moves to a record of 6 wins and 2 losses, while Foss now goes to an even 2 wins and 2 losses.  Tough loss for Foss, although it will be good experience for the up-coming fighter.