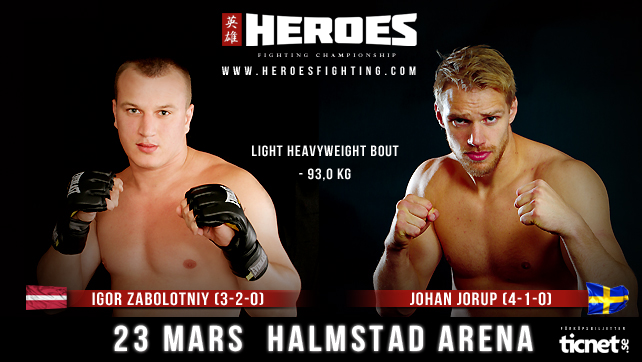 Earlier Heroes Fighting Championships announced that they’d tied up-and-comer Johan Jorup to their organisation. And now they’ve also found an opponent for him in Igor Zabolotniy (3-2-0). Zabolotniy started out his career with three wins that he won via submission but after that hit a bit of a wall and lost two fights by RNC. Linköpings Johan Jorup (4-1-0) had his last fight at Fighting For Change 2 in Oskarshamn only five days ago where he fought, and beat Marcin Elsner (8-7-0) via Darce Choke in the first round. This will be an exciting fight in which Jorup will look for the finish.

Heroes has also announced that the winner between the two bantamweights Martin Akhtar (2-0-0) and Emil “Mega Hertz” Hartsner (3-0-0) will be fighting for the belt against an opponent that hasn’t yet been decided at Heroes next event in Helsingborg, on September 28th 2013.