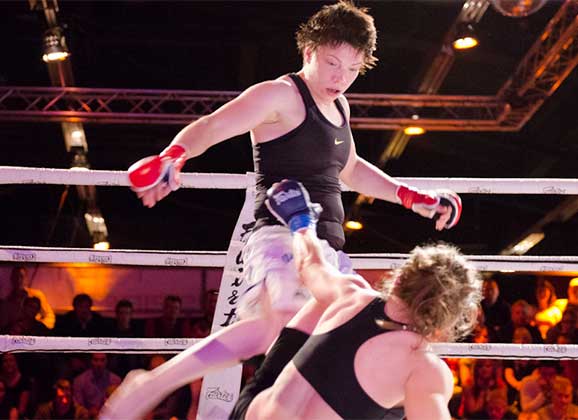 Finland’s Katja Kankaanpää has her next fight lined up and it takes place on the upcoming Invicta 7 card on December 7.

Kankaanpaa of Team Botnia Punishment has an impressive 8 win, 0 loss, and 1 draw record. Most recently, Killer Bunny beat Julian Carneiro Lima at Invicta FC 5 in April in a dominant unanimous decision. Prior to that win, she had one of her most impressive outings battering Aisling Daly at Cage Warriors 51 in December of last year.

The fight against Joanne Calderwood should be a great fight, with a wrester versus Muay Thai matchup. The Dinky Ninja’s fighter from Scotland also has experience fighting with Invicta, notching a unanimous decision back in July of this year. Calderwood is also undefeated at 7 wins and 0 losses.

The bout will go down at the Ameristar Casino Hotel in Kansas City. The promotion is marketing the card as “a stacked, nine-bout event featuring three world title fights, including a main event showdown between reigning flyweight champion Barb Honchak (8-2) of Bettendorf, Iowa and three-time “Fight of the Night” winner Leslie “The Peacemaker” Smith (6-3-1) of Pleasanton, Calif.”