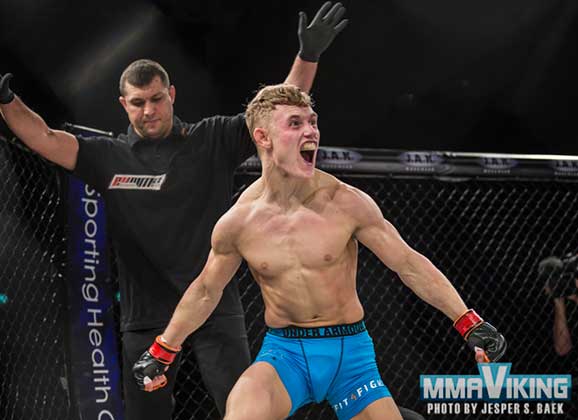 European MMA (EUMMA) 8 takes place this Saturday night at the Brøndbyhallen in Brøndby, Denmark. The card is topped by two top Nordic lightweight fighters in Denmark’s Ayub Tashkilot (11-3) versus Estonia’s Ott Tönissaar (7-1) fighting for the lightweight title. Other Danes such as Joachim Christensen, Søren Bak, Jonas Måågaard, and Mads Burnell look to make their mark, while the lone Norwegian Thomas Formo looks to continue his undefeated streak.

MMAViking.com will be reporting live, so bookmark this page and come back to catch all the live updated. 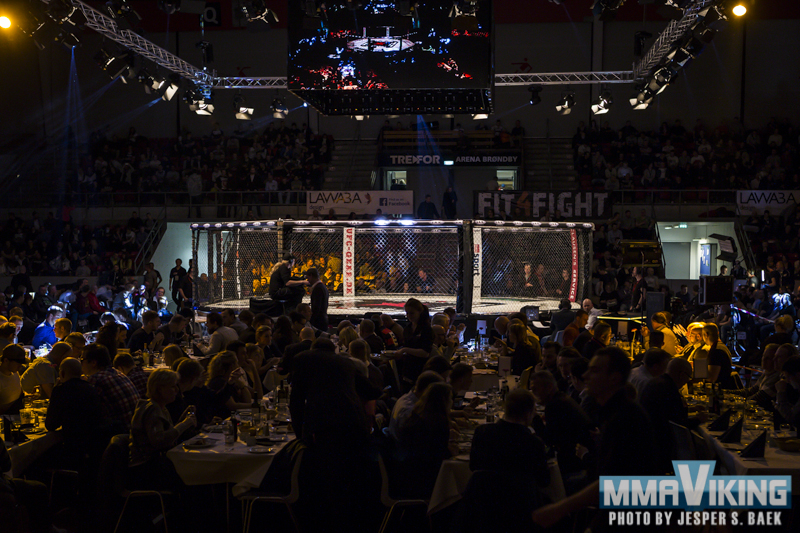 Round 1
Jonas “Shark” Mågård is in the first pro-fight of his career, against  a more experienced Eduard Heinz. But the young Dane gets a good start and hits the German with a right hook right after the start of the fight. Eduard Heinz tries to get a takedown and get control of the fight and the two fighters clinch up against the cage for several minutes. Around the 2-minute mark of the first round, Mågård gets the upperhand and takes the back of his opponent. Slowly but surely he gets a grip of Eduard Heinz’ neck and secures a rear naked choke. 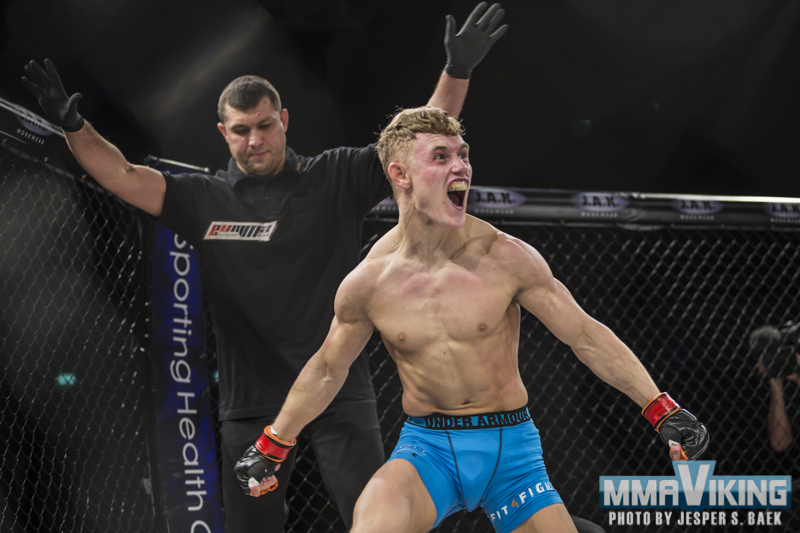 Søren Bak 3-0-0 (Denmark) vs. Said Govduchanov (Swiss) – 70,0 kg
Round 1
Lots of clinching in the initial stage of the fight. Søren Bak is a great grappler and eventually gains control and a takedown. Very quickly he moves to a full mount, but just as quickly he looses the dominant position again. Even so, Bak keeps holding on to the neck of Govduchanov and tries secure a guillotine choke. After a few moments of grappling where Govduchanov tries to escape, Søren regains full mount position. He starts throwing elbow after elbow at the face of the Swiss fighter. Said Govduchanov manages to hold out until the round finishes and parries most of the elbows to avoid too much damage. 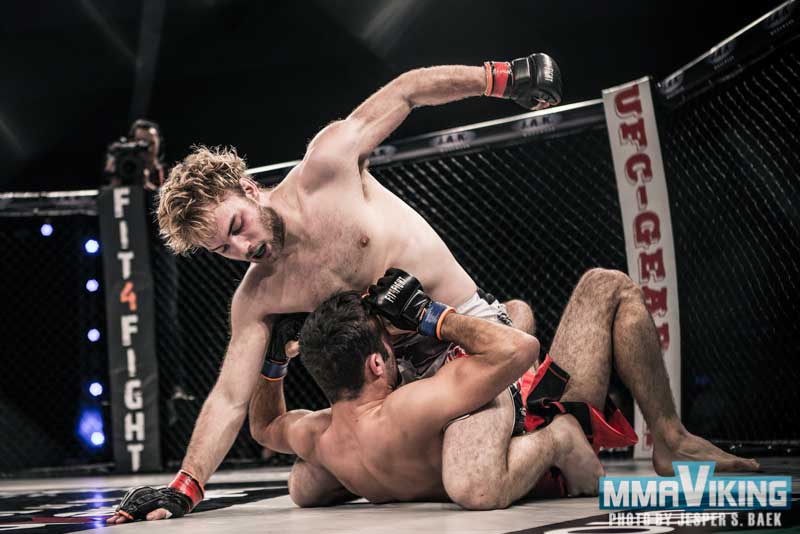 Round 2
At the very beginning of round 2, Bak knocks down Govduchanov and follows through  and continues where he left off in the first round. Govduchanov tries to turn things around and get out of the sticky situation, but Bak catches him in a triangle choke.

Mads Burnell 1-0-0 (Denmark) vs. Selcuk Ayin (Germany) 4-8-0 – 66.0 kg
Round 1
Very short fight here. Ayin tried to take Burnell down to the ground, which was a huge mistake. Burnell quickly secured what looked like a D’Arce choke and made Ayin tap out.

Mads Burnell submits Selcuk Ayin in the first round

Thomas Formo 2-0-0 (Norway) vs. Harun Kina (Holland) 4-8-0 – 77,0 kg
Round 1
Formo of course enters the cage in his “Maverick” gear. There is a big height advantage for Formo in this fight. The two fighters starts out exchanging strikes and it doesn’t look like either wants to try to take it to the ground. Halfway through the round Formo decides to start clinching and tries to deliver a few muay-thai knees, but Kina blocks them and wrestles away from the clinch. So far a close round where neither fighter really sticks out as being dominant. During the last couple of minutes of the round, Formo gets the takedown and gets a hold of the arm of Kina and slaps in an armbar for the win in the very first round. 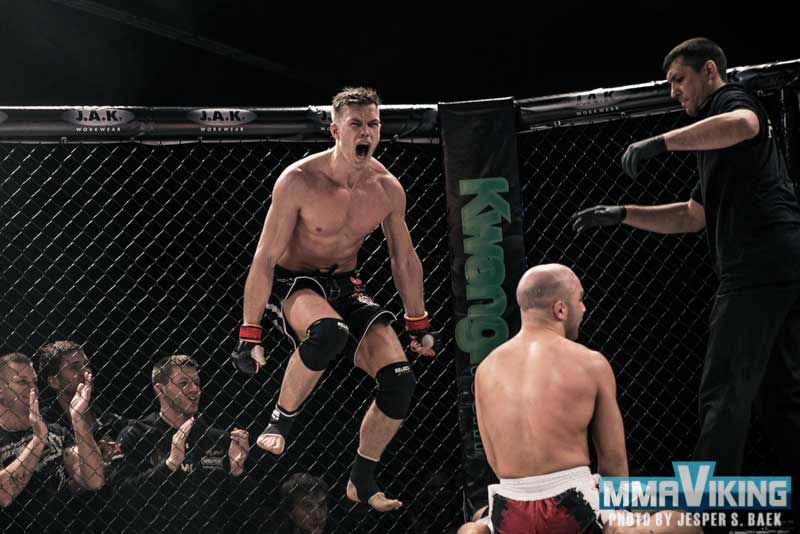 Thomas “Maverick” Formo wins by armbar in the first round.

Rhassan Murrab 0-1-0 (Denmark) vs. Joziro Boye 5-3-0 (Holland) – 66,0 kg
Round 1
Murrab is a muay-thai fighter and got the worst start he could imagine, since he got taken down early on. However he rolls around and moves into the guard of Boye. Murrab tries to get a few hits in but eventually moves backup and both fighters are in the standup position again. Boye clearly doesn’t want anything of the standup exchanges and takes down Murrab again. Boye strikes again and again until the bell saves Murrab from further punches.

Round 2
Boye once again tries to get the fight to the ground. He is very close to securing a triangle choke, but Murrab lifts him up and slams Boye to the mat – which the crowd applauds. However, Boye keeps hanging on and Murrab struggles to escape and get back to his feet. The round ends with Boye on top trying to secure a sidechoke. The first two rounds should be for Boye, so it looks like Murrab needs to finish this in round three.

Round 3
The crowd is really behind Murrab – who needs all the support he can get, to take this one home. Once again the fight goes to the ground with Boye on top and Murrab struggling. Although he is on his back, Murrab still manages to get some shots in on Boye. Boye moves up and gets to full mount, however that seemed too be just what Murrab needed, as he tips Boye off, gets up and sends a knee to the chest of Boye. Now Murrab is on top and gets to full mount. Boye doesn’t let Murrab get any space to deliver his strikes and eventually the tables are turned and Boye is back on top. The last round ends with Boye on top and since this is the last round, we need to get the judges into play for the first time this evening. As expected Boye took the decision. 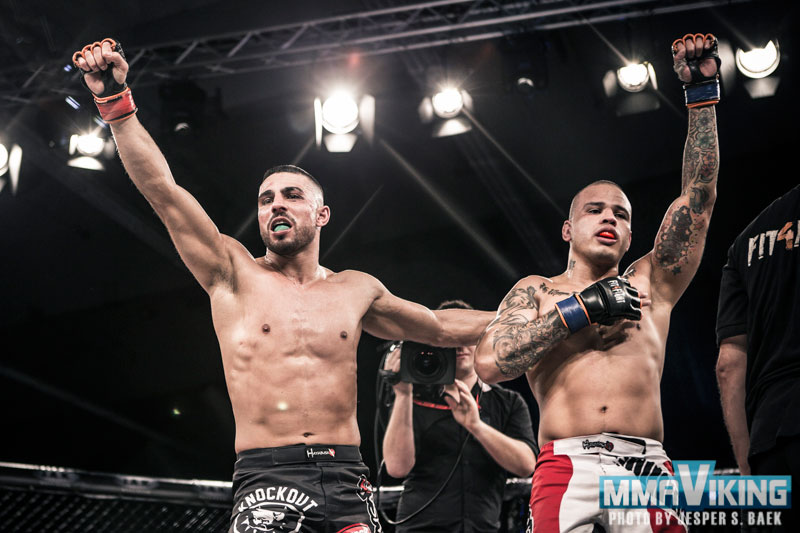 Joachim Christensen 8-3-0 (Denmark) vs. Stephan Pütz 9-0-0 (Germany) – 93,0 Kg
Round 1
Joachim Christensen is looking to get a win again, after he lost to Marcus Vanttinen by decision back in September. But he is looking at a tough fight, facing undefeated German Stephan Pütz. Being a great grappler,Christensen will probably look to take the fight to the ground, but in the first minute of the fight it’s pretty straight forward exhange of punches. After the initial exchanges, Christensen is starting to clinch, looking for the takedown, but Pütz keeps the fight standing. The fight kind of goes to a stalemate, with the two fighters clinching against the cagewall. Neither seems to really be able to get an advantage or be able to deliver effective strikes or get the takedown. The last minute of the fight has Pütz pressing Christensen up against the cage. The horn sounds and we go to round two.

Round 2
Pütz starts out the second round by pressing Christensen up against the cage again. However, Christensen gets the better of it, graps Pütz by he neck and tries to deliver some muay thai knees. Now the tables have turned and Christensen is pressing forward – pushing Pütz up against the cage. Back and forth it goes with the two fighters trying to gain control of the clinch and deliver some effective punches or knees. It’s a pretty good back and forth battle in the clinch. If this goes the distance it will be interesting to see what the judges have to say. The round ends and it more or less was a carbon copy of the first round with the two fighters battling for control in the clinch.

Round 3
At the start of round three the corwd starts a “Joachim” chant in support of the home-town hero. Again the two fighters initiate the clinch and they shift positions back and forth. At the halfway mark of the fight the crowd erupts in chants again. Shortly after, the referee decides to seperate the two fighters as he probably felt there was not enough action going on. But the two fighters are like magnets and not ten seconds pass before they are in a clinch again. During the last 20 seconds of the fight Christensen tried to get an arm-submission in from a standing position, but he is not able to secure it. It’s a very close fight and it’s interesting to see who the judges felt won that fight. They are not in doubt and all three judges give the fight to Joachim Christensen.

Lightweight Title fight Ayub Tashkilot 11-3-0 (Denmark) vs. Ott Tönissaar (Estonia) 7-1-0
Round 1
Both fighers are coming from a wrestling background, so it will be interesting to see where the fight goes. In his last fight, Ayub “Zap” Tashkilot wanted to show people his striking power and proved that he has power in his punches by knocking out his opponent in he very first round, while most of Ott Tönissaars win has come through submission . After the mandatory national anthems, we are ready to get it on and find a new EUMMA lightweight champion. After the initial feeling out process it’s Tönissar that gets the first takedown. Tashkilot remains calm however, and does not let the Estonian get in too much offense. Tashkilot even tries to secure a leg submission which does not work, but still gives Tashkilot an advantage. He secures the back of Tönissar and tries another submission attempt, with no luck. Tönissaar tries to get out but it’s Tashkilot who gets the better of it and gets in fullmount. During the back and forth scramble on the ground Tönissaar also tries leg submission, which also fails. The first round ends and we go to the second.

Round 2
At the start of the second round does not look like the two fighers want to take it to the ground. There is some exchange of punches and clinching. Around the 1 minute mark of the round, Tönissar secures a takedown however. Again, Tashkilot is very active from the guard and does whatever he can to fend off any attacks from the Estonian. Just before the three minute mark, Tashkilot is back on top again in Tönissaars guard. The referee does not seem to think they are active enough and decides to stand them back up with 1½ minute to go.With around 40 seconds left, Tönissaar tries again with a leg submission, but he can’t sink it in. While defending from this attack, Tashkilot sends a shot to the stomach of Tönissar, which the Estonian did not seem to like one bit. The round ends and we go to round three.

Round 3
The round starts with Tashkilot on top again. There was a brief stoppage around the four minute mark. I’m not entirely sure what was going on, maybe the two fighters accidentally butted heads. But luckily the fight is back on again soon after. Tashkilot is staying on top in the dominant position. For a short moment Tashkilot stands up to get some distance, and that’s all Tönissaar needs to get back to his feet. In the exchanges on the feet Tashkilot seems to be a bit better and gets a few good punches in. Soon after he is taken down however and the round ends with Tönissaar on top. So the main event goes to a decision as well. The judges all agree that Tashkilot was the better and he is the new EUMMA lightweight champion 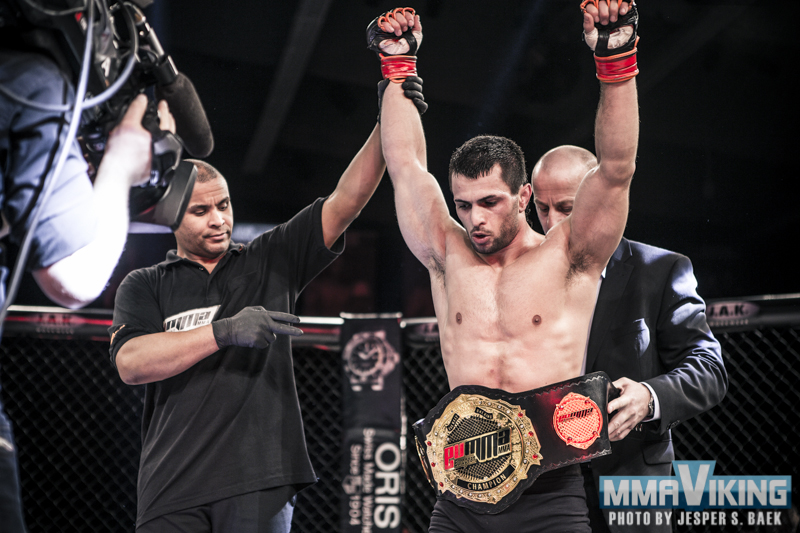 As always, come back after the fights for the best fight pictures from Jesper S. Baek.