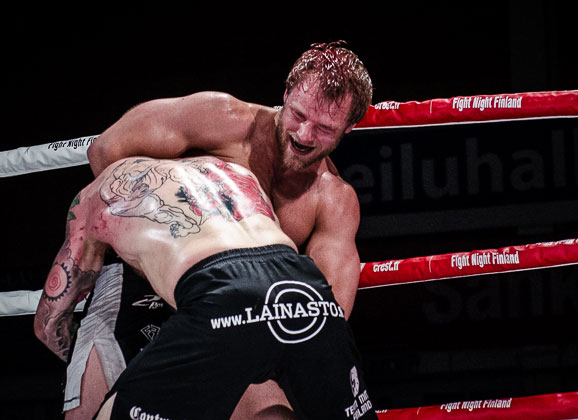 Finn Anton Kuivanen (20-7-0, #1 Nordic rank) will face American Dakota Cochrane (16-5-0) in the headliner of Helsinki Fight Night will go down Saturday night.  MMAViking.com is live in Helsinki, Finland at the Pasilan Urheiluhalli.  This is Fight Night Finland (FNF)  first trip to Helsinki and features anticipated veterans Mikko Rupponen and Timo Suhonen.  Plus a Finn versus Finn matchup of Juho Valamaa versus Johan Vänttinen.  Other prominent Finns such as undefeated Mika Hämäläinen and Juho Valamaa.

The fights are taking place at Pasilan Urheiluhalli, which is a gym near the Hartwell Arena, where the UFC could be taking place later in the year.  Looks to be 1,300 – 1,500 fans in attendance. 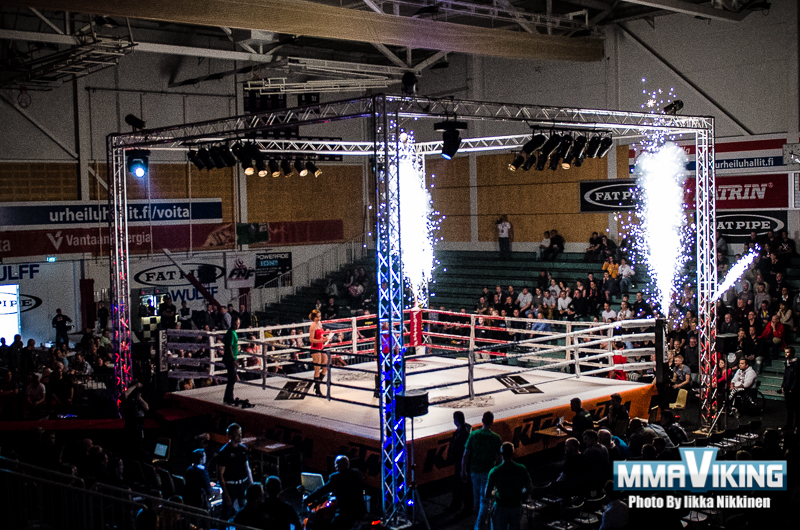 Timo Suihkonen (1-1-0) Team Botnia Punishment vs Linas Griguola, MMA Team The Knight of Plunge – MMA – 65kg
Round 1 – Griguola is the first to enter, and now ground specialist Finn Suihkonen.  Suihkonen gets his way early finishing on a take-down.  He works from top position and tries to work toward a kimura, but the Lithuanian fighter able to defend, and moves to the feet.  Again the Finn tries to get it to the ground to finish the round strong.

Round  2 – Suihkonen finishes a double-leg take-down to get the fight to the ground, and quickly moves to mount. Tide is turning at the fight goes to the feet, and Griguola is starting to be more effective on the feet.  The Finn is tiring.

Round 3 – Crisp combinations for the visiting fighter that looks to be the much more energetic.  Desperate shot from Suihkonen, and after a few tries gets it and moves up.  The Finnn is now on the bottom after losing back and following over the top.  The Lithuanian is looking for an arm triangle, but its not tight… and he is rolled to his back.  Strong finish for the Finn as he lands a few more blows from the top.

Mikko Rupponen (19-5-0) Espoon kehähait vs Mazvydas Pieza (2-3-0) – MMA – 83.9kg
Round 1- Rupponen goes to clinch early and the two tie up near the ropes.  The Finn is relentless with knees to the thighs, mixing up punches on the inside.  The two southpaws are now mixing it up on the feet, and the young Lithuantian cracks with a big left hand and Rupponen doesn’t want any part of it, trying to finish a takedown with grabbing the head and hooking the leg on the outside, but he can’t get it.  Back again to the cover of The Night of Plunge as the coach yells instructions.  Rupponen prefers top push his opponent against the ropes and lands a big knee.  A tie up and a big left and right knee, then elbow standing to finish the round.

Rouund 2 – Again the Finn is showing he is the tougher in the clinch, landing knees to the body from both sides.  Big elbow from the Finn, and he is pushing the pace in the second.  The two separate, and Mikko takes it to the ground to finish the round, avoiding an armbar at the bell.

Round 3 – Rupponen uses a double-leg early and looks to be taking the safe route in the third round, not seeking to improve position on top.  The fight is moved to the feet, but the Finn again puts the Lithuanian on his back finishing the last round strong.

Ville Aalto (42-5-1) vs Aleksei Sidorenko Venäjä – Muay thai – 86 kg
Round 1
Bad injury to the shin that is checked and the bout is over in seconds as doctors rush in.

Mika Hämäläinen ( 5-0-0 ) GB Gym / Team MMA Finland vs Murad Zeinulabidov (7-1-0) Venäjä – MMA – 61.2 kg
Round 1
Hämäläinen takes the fight to the ground early, but gets kneed to the face as he shoots in.  Looking for an ankle lock early but can’t get it.  Zeinulabidov is a crafty grappler and starts to wrap up Hämäläinen, who looks for armbar then triangle.  The bout is over as the Finn is submitted in the first round by Zeinulabidov as he is forced to tap to a triangle and armbar.

Round 2
The two mix it up in the tie, and it looks like Kone lands a good shot. Suhonen dives in for a take-down, but he is in the plum of Kone, that takes a massive left knee to the Finns face for a kill shot. Suhonen is out and it is over!

Pasi Luukkanen (36-23-0) TTBC vs. Antero Hynynen (63-24-2) KOTR – Muay Thai – 69kg
An absolute war here with Luukkanen and Hynynen going back and forth in a spirited fight over five three minute rounds.

Hynynen celebrating the win early as the cards are read. And a split decision win for the KOTR fighter Hynynen is announced.

Juho Valamaa ( 6-2-0 ) FFG / Team MMA Finland vs Johan Vänttinen (10-4-0) Fight Factory Porvoo – MMA – 77.1 kg
Round 1
Vänttinen lands a nice kick early low, and the fight has the crowd picking sides already. Vänttinen shoots in for a takedown, but Valamaa counters with a guillotine, but can’t get it. A sweep, and now the fight is back on the feet. Two nice elbows from the Fight Factory Porvoo fighter. A break in the action with a knee to the cup, but Vänttinen takes a minute to rest and it is back on. The two tie along the ropes with the FFG fighter with his back in the corner, and now Johan gets the finish he wanted. Again, Valamaa locks around the neck looking for a guillotine, but can’t get it. Good ground and pound from Valamaa, and a nice right hand to finish the round through upkick attemps from Valamaa. Strong round for Vänttinen.

Round 2
The two hit the ground after a slip, and it is Valamaa looking to finish with a leg lock, but Johan counters out. A lazy shot from Vänttinen and it is countered as the fight remains standing.  Valamaa takes back as the two tie-up against the ropes, but not for long.  Attempting a throw, Valamaa ends up on his back instead of on top.  The two are repositioneed in the middle of the ring, and both landing damage from the top and the bottom.  Good elbows from the bottom from Valamaa and the Finn on top is cut.  The FFG fighter may have won that bout from the bottom.

Wild last sequence as Vänttinen picks up Valamaa with all his might to finish in a suplex inspired pick lift and throw to the ground, but Valamaa isn’t giving up and gets back up to take down Vänttinen in a slam of his own to end up on top.  Great fight!  Wow.

Johan Vänttinen is awarded the win by unanimous decision in a candidate for fight of the year.

Kai Puolakka ( 11-4-0) GB Gym / Team MMA Finland vs Davy Gallon (12-3-0) Adrenaline Fight Team, Ranska – MMA – 77.1 kg
Round 1
Puolakka is using his muscles in the tie-ups along the cage early, forcing the french fighter to fight for position.  The two break and strike, with Gallon looking for some power blows.  Gallon looks for some flashy kicks from standing from distance.  Puolakka is taken down and forced to fight off his back as the visitor is looking for elbows from the top.  The round is coming to an end but the French fighter looking to finish as Kai gives up his back and teh RNC is there to be taken.  End of round, and a good one for Gallon.

Round 2
Puolakka with a full body lock and takes Gallon straight to his back, but rolls right through and they are back on their feet.  Gallon looking for kill shots, as you can feel his power as he swings for the fences.  Puolakka on his back again, and now the Frenchman drops for an ankle lock and it looks tight, but moved to more of a knee bar as Puolakka rolls for his life.  A tap from the Finn.  Gallon finished the bout as his team rushes in the ring to celebrate.

Davy Gallon finishes with a kneebar.

Round 2
Again, it is the Swede that lands hard knees as soon as the two tie-up.  In the clinch, it is Dahlbeck that sweeps the legs and puts the Finland based fighter.  At distance it is Bin’s advantage.  The left straight and elbow begin to land for Dahlbeck. and in the tie, the Swede doesn’t stop.  Both raise there hands as round 2 ends, and the pace quickens. 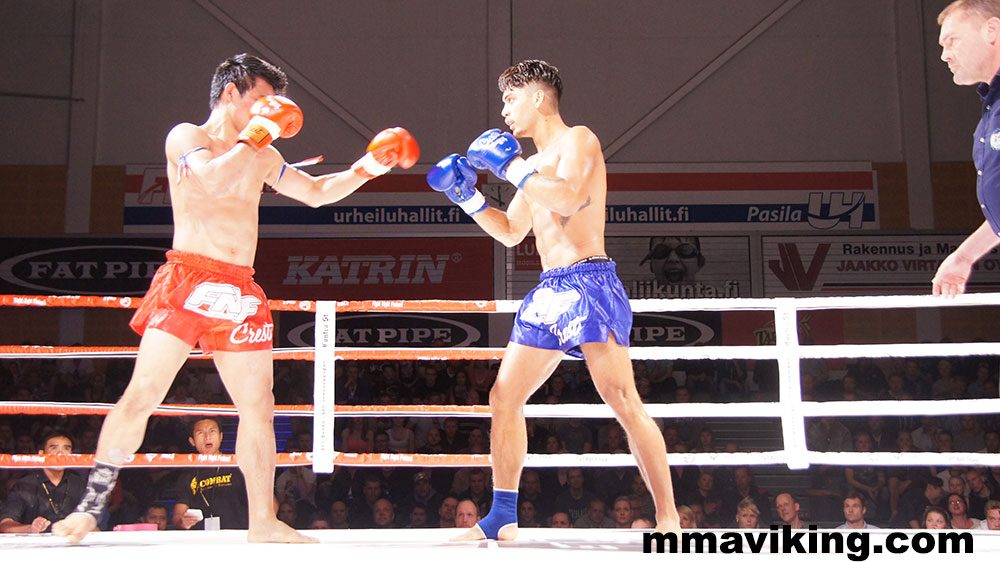 Round 3
The two continue to battle, with each getting off their own kicks.  The two are enjoying this one as they smile after taking clean shots.  Dahlbeck invites the Thai fighter into the center of the ring, and the next exchange is pure violence with huge punches landing from each.  Nobody is backing down, and what a fight as round 3 ends.

Round 4
HUGE left hand from Sanny and it looked like a tooth flew out of the ring.  The Finnish based fighter is pissed off and invites more exchanges.  The fighters continue to exchange kicks throughout the round in another close one.

Round 5
Dahlbeck landing some big punches and elbows, but no fighter is giving in.  The Swede raises his hand mid round to celebrate what he hopes is a decision victory.

The decision goes to Deo ”Check Bin” Phetsangkhat, the winner.

Anton Kuivanen ( 20-7-0 ) GB GYM / Team MMA Finland vs Dakota Cochrane (16-5-0) Premier Combat Center, USA
MMA – 70.3 kg
Round 1
The two feel each other out early with some kicks, then Kuivanen shoots in for a takedown but it is the American with a huge knee to the face that KO’s the Finn.  It’s over. KO for the American in the first round. 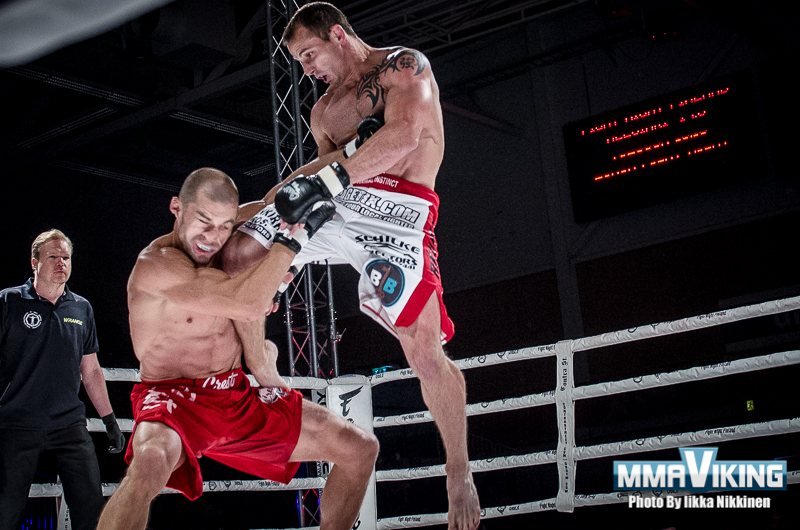