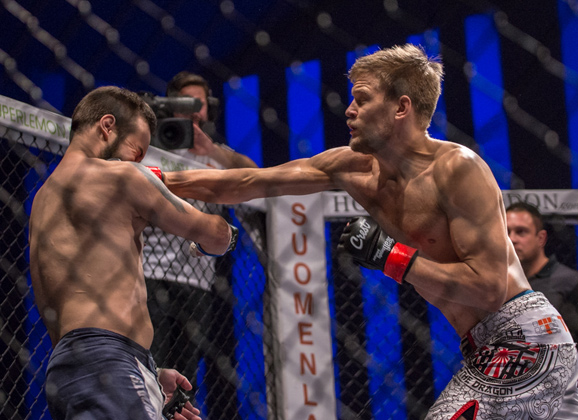 CAGE 33 put on a 6 fight pro MMA card in Helsinki tonightt with each fight will have a Finn battle international talent, including Swede Jonathan Svensson. The headliner is a fight between Anton Kuivanen, the lightweight champion, against Brazilian Thibault Gouti. MMAViking.com is live cageside at the Helsinki Culture House for updates and photos. See live results below.

Saku Heikkola, Heracles vs. Mikolaj Rozanski, Poland
Round 1
Heikkola takes control of the centre and starts working with kicks, Rozanski counters with a combo and makes Heikkola move away. Rozanski goes in with a combo and shoots for a takedown, well defended by the Finn. A short break after the Pole getting hit in the groin by a kick but he’s ok and it’s back on. Heikkola lands a headkick but gets taken down and ends up with the opponent on top, both fighters scramble for better positions but time runs out. 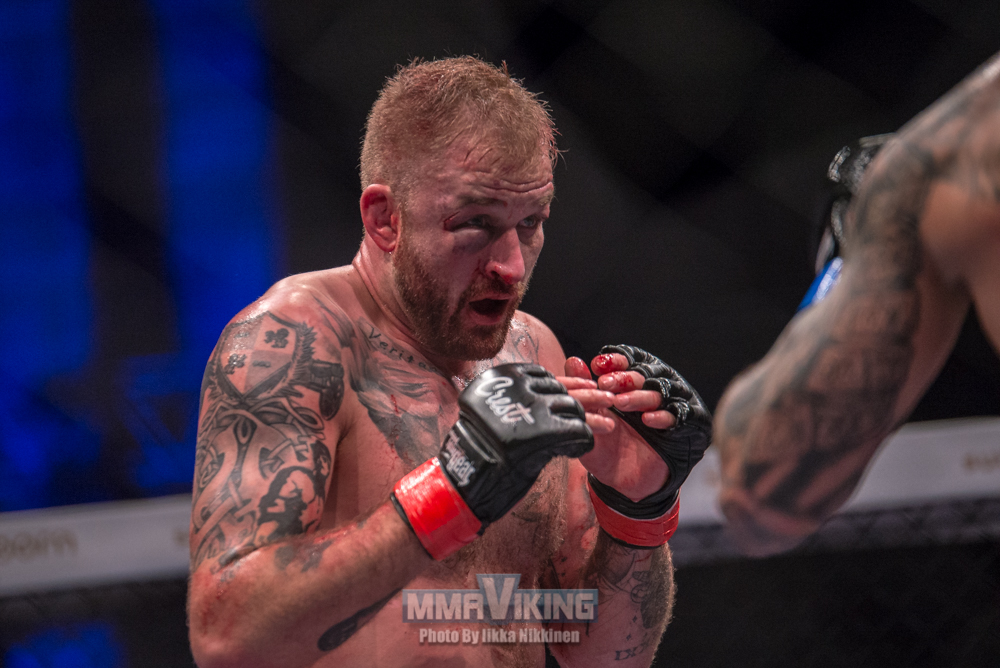 Round 2
They touch gloves and get back to work, both fighters swing hard and wild and Heikkola gets a small cut over his right eye. Heikkola gets tagged and stumbles down, he gets in close and clinches the Pole and forces him to the cage but Rozanski smells blood and keeps hammering him. He takes Heikkolas back who’s bleeding a lot from the small cut and works with punches. Rozanski does a good job and dominates the curled up Heikkola who’s not getting any room to get away or improve but he’s saved by the bell.

Round 3
Heikkola has a very swollen eye but the third round is on, and it’s Rozanski who’s in charge. He gets Heikkola down after a good combo and starts to punch away. After 2 minutes on the canvas the referee starts to tell Heikkola to defend him self but he’s unable and the ref stops it.

Winner by TKO at 2:01 in round 3 Mikolaj Rozanski.

Aleksi Nurminen, RNC vs. Jean Filipe Prestes Dos Santos
Round 1
It starts out slow but it’s all Nurminen, Dos Santos struggles to find his reach as Leksa lands some nice combos and kicks. Four times he uses punches and kicks combined to make the Brazilian fall down but he let’s him stand back up. Time ends. 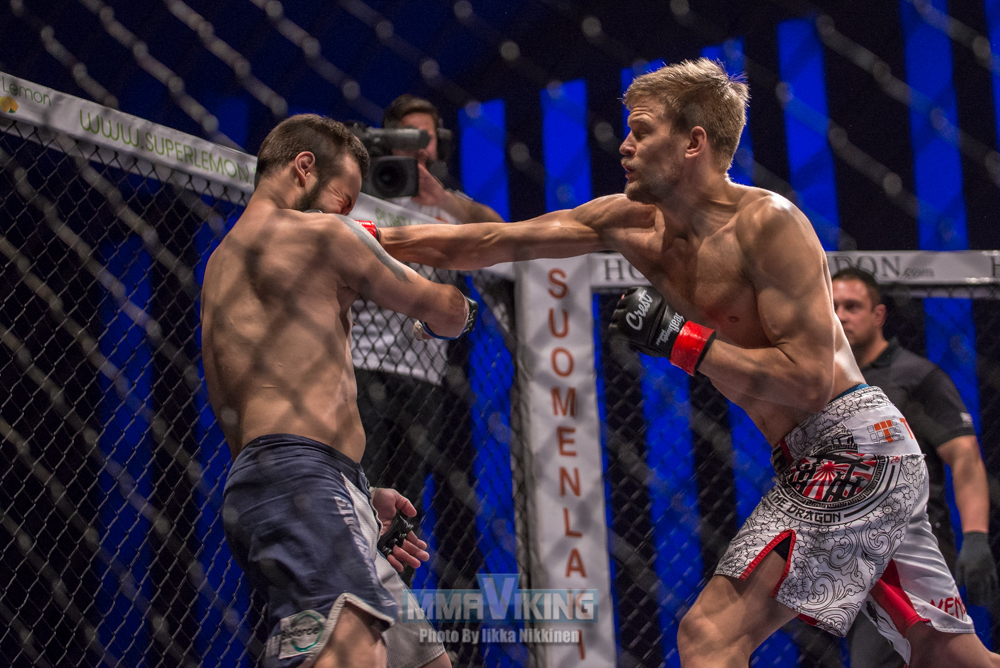 Round 2
Second round is on and it’s still Nurminen who runs the show, with center control he makes Dos Santos move around and take fast combos and kicks. Dos Santos keeps struggling but he manages get away until Leksa gets him down, he lands some heavy shots before taking the back, securing the rear naked choke and making Dos Santos tap out.

Winner by Submission (Rear Naked Choke) at 2:26 in round 2, Aleksi Nurminen

Mikael Nyyssönen, WFC vs. Jonathan Svensson, Pancrase Gym Sweden
Round 1
The lightweights start out with finding their reach, both landing and taking some hits. After a short clinch against the cage they are back in the center, Nyyssönen shoots for a takedown but Svensson sprawls out and they get back to exchanging punches. After a few successful punch/kick combos by Svensson, Nyyssönen gets a takedown but it leads nowhere. Now Svensson lands a good and high takedown, Nyyssönen defends well and gets up against the cage as time runs out. 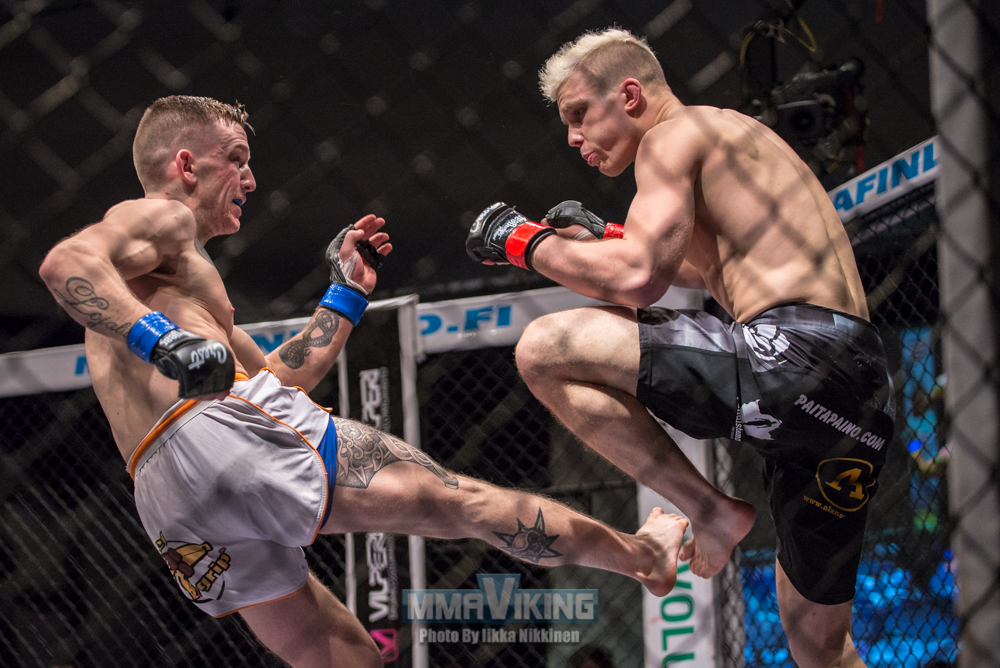 Round 2
Svensson starts with a nice pushkick in the face of Nyyssönen but no damage done, they clinch up and go to the cage struggling for positions. The taller Finn gets some good knees whenever they clinch up, Svensson looks tired as he takes another hard knee to the mid section. Short exchanges from two tired fighters as the time ends.

Round 3
The Swede comes in looking lighter on his feet and lands a fine head kick but Nyyssönen doesn’t back down and goes for the clinch. They stand up against the cage fighting over the best position, Nyyssönen gets some knees and punches before trying for a takedown that goes nowhere. Nice movement from Svensson as he ducks and rolls under the Finns combos. The last minute is mostly clinch and some punches flying before the time runs out and it’s up to the judges. It takes the judges some time so it seems like a close one. 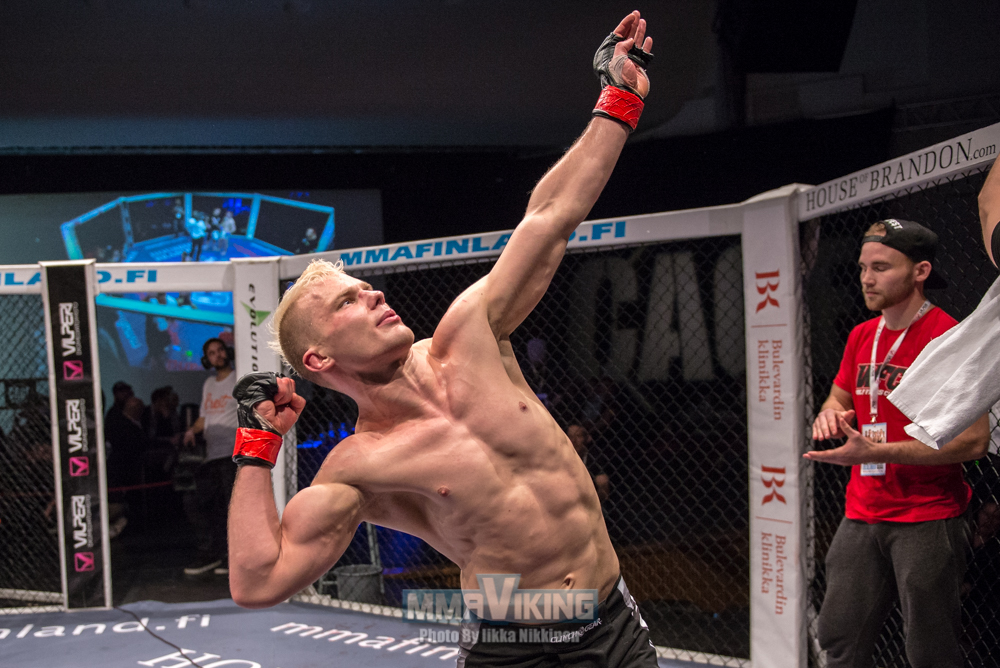 Round 1
Souza opens up with some fast kicks but Silander responds with some good hits and they clinch up working with their knees. They go back to exchanging fast combos and the Souza scores a good takedown but ends up in a triangle attempt, he escapes. They get back up and start working with knees in the clinch, Souza being the more active and trips the Finn. Souza lands in the halfguard of Silander and works with punches to the ribs. He the gets into full mount and then takes the back of the Finn, working punches but the buzzer sounds and ends it.

Round 2
Silander lands a good hook early but the Brazilian answers with a hard spinning back kick to the stomach of Silander and then pushes him up against the cage. Silander is landing a lot of fine combos and kicks, then gets a really fine throw as he lands on top he punches. Silander now seem to land most punches and some elbows to. From his full guard Souza now attempts a triangle choke, silander is stuck but it’s not really there but it’s getting tighter as the final seconds runs out.

Round 3
Souza is visibly the more tired one and almost stumbles around dodging punches before he lays down and wants to grapple. The ref makes him stand up and it’s Silander who lands the most before the Brazilian lies down again. Souza stands against the cage a almost just takes the punches for a while but The Hulk backs of and wants him to defend himself. Yet again souza lays down but gets back up, Silander keeps working on him but is careful to not get taged by something, after a final lie down from the Brazilian the time runs out and the judges will make their decision. This shouldn’t be a tough one for them. 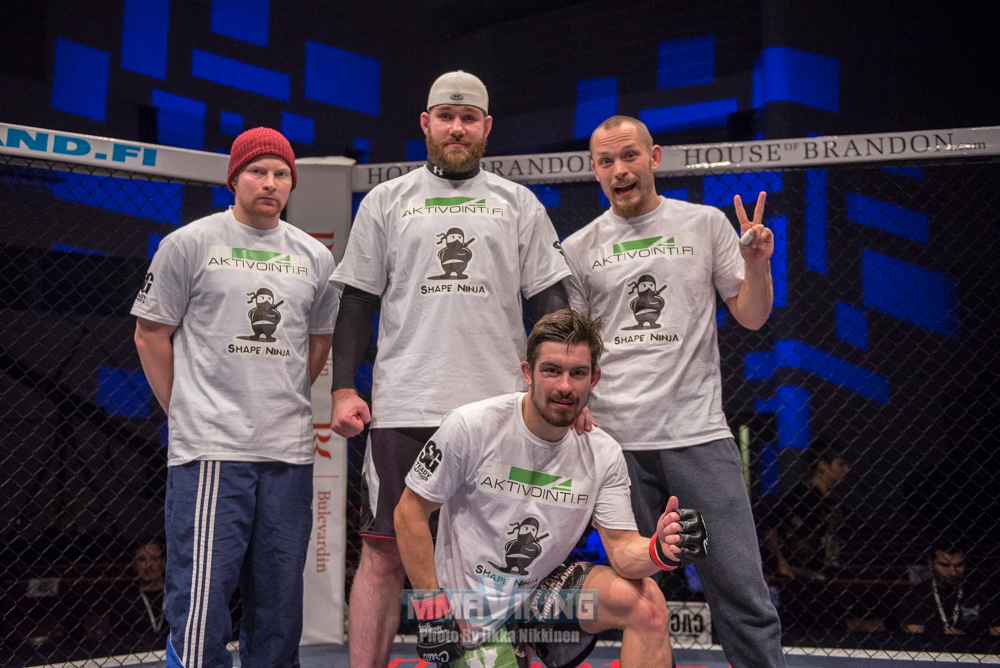 Round 1
Kulmala takes centre control but Betran throws some good kicks early on, the brazilian is the more aggressive one but Jamba remains calm. That calmness earns him a nice knock down but Betran is quick to his feet befor eany damage is done. It’s Kulmala who choses his punches well and gets a nice knock down again, after taking a solid side control Jamba lets heavy shots rain on the balled up Brazilian, he even yells at the referee if his not going to stop it soon. A little moment later the ref finally saves Betran from Kulmalas heavy hands. 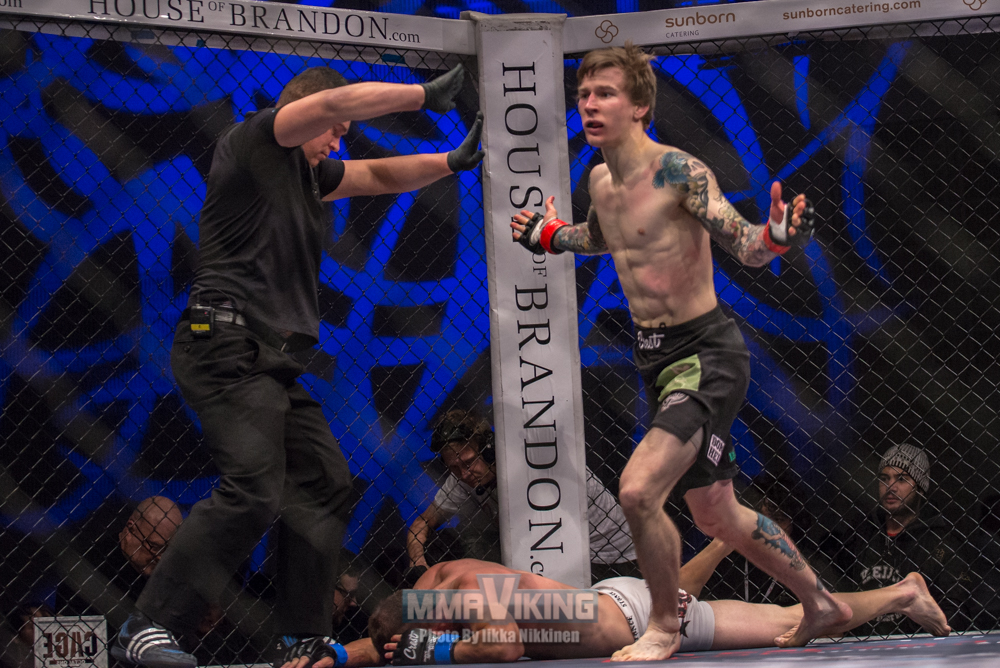 Winner by TKO at 0:54 in the first round is Janne “Jamba” Elonen-Kulmala.

Anton Kuivanen, Primus vs. Thibault Gouti, France
Round 1
After some brief hard reach punches it’s Gouti who lands a hard right that sends Kuivanen into the cage but he’s alright and gets right back into action. Anton drives the frenchman into the cage and they clinch up with Kuivanen landing a knee. They move around the octagon and both try to land hard combos, Anton tries for a flying knee but shortly after that he gets tagged and Gouti lets the punches fly on the lying Finn, Anton struggles and makes it back to his feet. Both fighters mean business judging by the power they put into every punch and kick, Anton falls down after a kick but the time runs out. 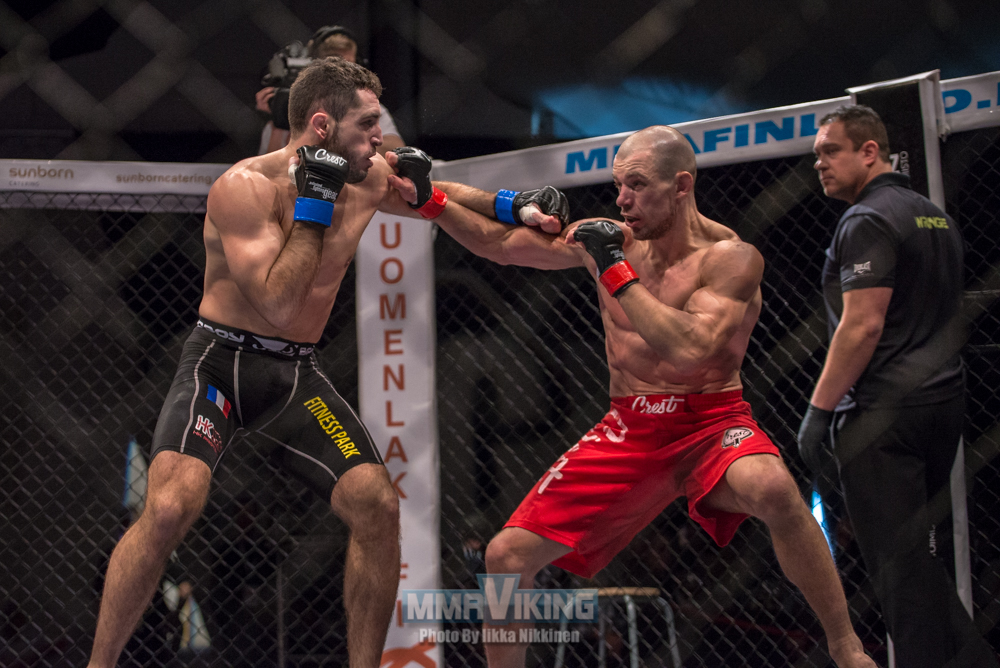 Round 2
Same hard punches and kicks starts to fly and it’s Kuivanen who tagges Gouti and follows it up with more hard punches, as Gouti gets away Anton scores a fine takedown. They get back up and now the frenchman pushes on and as Anton is up against the cage he lands several hard punches across the jaw of Anton who won’t give up. A now bleeding Kuivanen shoots for a takedown but Gouti defends great and the end up against the Cage. Gouti keeps landing punches as they move around, both fighters land some good low kicks but it’s Gouti who follows it up with a hard hook that rocks the Finn. Anton gets out of the punch line and clinches up, the time runs out and sends this fight into a last third round.

Round 3
They go at it again and After a nice hit by Anton they clinch for a while but get back to exchanging. It is in this exchange that Kuivanen gets tagged again and this time Gouti does not hold back knocking Kuivanen out on his feet. It is all over. 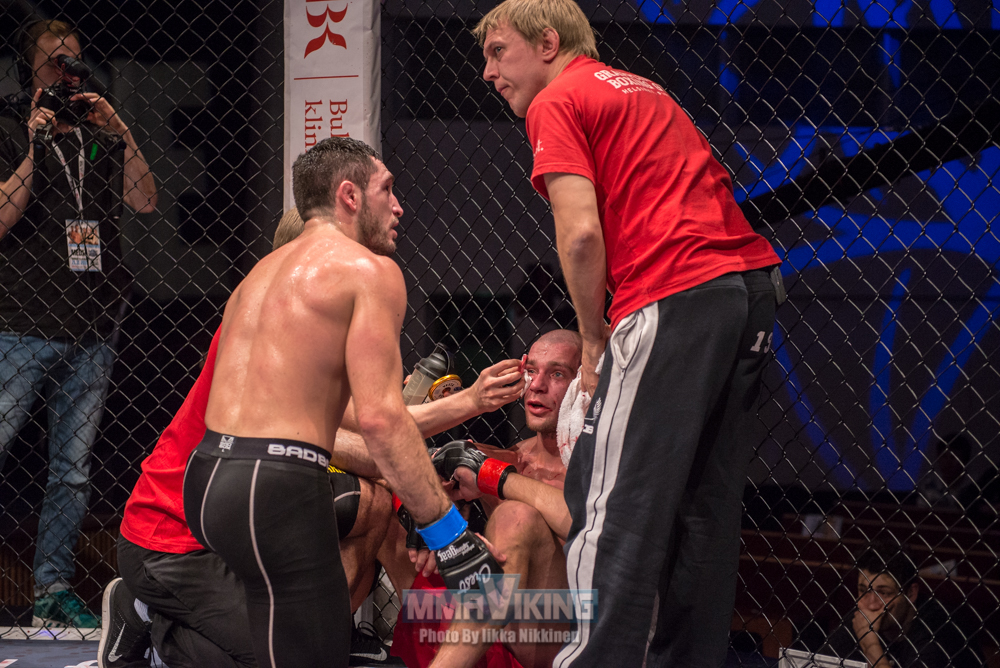 Winner by KO at 2:52 and new Cage Light Weight Champion is Thibault Gouti.