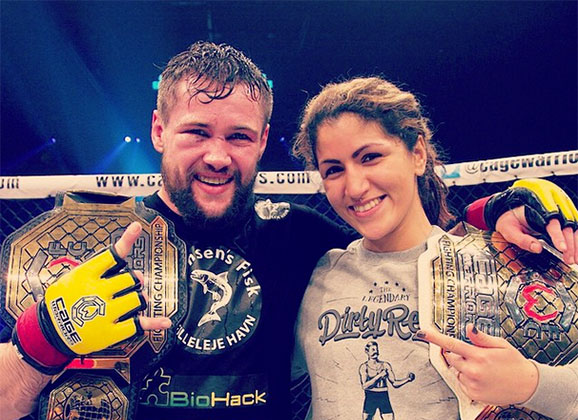 It was a busy week for Nordic MMA.  There was Nordic fighter in a pro bout in Finland, Lithuania, Estonia, but most of the action was in London where two Scandinavian fighters came home with two Cage Warriors belts.  Here is a run-down of all that went down, including one of MMAViking.com’s own.

Kvarnström wins in Turku, Finland
Turku Star Fights took place in Turku on Saturday night.  In the only pro MMA match, it was Jerry Kvarnström (12-6) won by submission by submission in the second round over Belgian Freddy DeBesselille.  Veera Nykänen won an amateur against another Finn in FinnFighters Gym’s Minna Grusander, but controlling the first two rounds before Grusander was able to take back and look for a submission in the third.  The atomweight Nykänen had fought professional last year, but looking to get some more experience and took the amateur bout. Jyväskylän Fight Club’s Janne Sauvola was also victorious.

First half of the opening round, Alik was having trouble catching his opponent. The Belgian moved well but kept his hands low, he got hit by Alik couple of times but nothing serious. Alik attempted strong overhand rights that backed up his opponent but never hit. Around the minute mark Alik shot in but the Egoluev sprawled quickly (having his hands low helped him get the underhooks and his hips away from Alik) and backed away, still with his hands low Alik went for another overhand (ducking low to the right and cocking his right hand), the Belgian saw the movement and threw a beautiful right straight, hitting Tseiko right behind the left ear. Alik crumbled to the floor falling on his own limp body and the opponent didn’t follow with strikes, looked at the referee and walked away. Crowd was confused for a second and then realized, yes Alik is out cold.

Dalby and Kianzad Come Home with Belts
All three Rumble sports fighters won Saturday night in London.  First was Dane Anna Elmose (1-0) who kick off the Cage Warriors 74 card in her pro debut with a 19 second TKO.  Then vacant CWFC women’s bantamweight world title was won by unanimous decision as Finn Eeva Siiskonen (3-2) put up a great fight on short notice, but wasn’t enough for Swede Pannie Kianzad (7-0) in the 5 round affair. Champion Nicolas Dalby (13-0) defended his belt against Norway’s Mohsen Bahari (8-2) in the final fight of the night. The Sharpshooter was effective throughout, and Bahari shared on Facebook that he broke a rib in the first round due to the damage.

Darabi Without Opponent for IRFA
Iman Darabi will not fight at next Saturday’s IRFA 7. It was revealed Saturday that her latest opponent was injured, and there just aren’t any 50kg professional women in the area wanting to step up. In allm the card now has six professional bouts on the Stockholm card.

Ingar Maximus Storsve Robbed in Lithuania
Norwegian Ingar Maximus Storsve fought Lithuanian Kestutis Smirnovas (24-8) on the King of King card in Vilnus, Lithuania. The fight was slow, Smirnovas took him down in first and tried guillotine choke. Storsve used leg kicks and dominated the 2nd round. It was ruled a draw, although the Norwegian dominated and should have been declared the winner after two rounds.

Daniel Schälander with Nasty Submission in Sweden
Last but not least, MMAViking.com’s own Daniel Schälander (AKA -spiderpigbegins) won again by submission. This time it was a Gunnar Nelson inspired guillotine in the first round of his MMA Shoot Fight moving him to one fight away from becoming Sweden’s best in 2014. 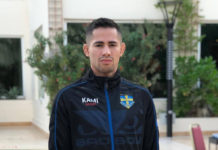 Schälander ‘I’m bringing the IMMAF gold back to Sweden’ 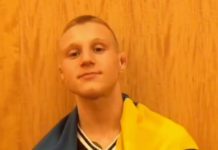 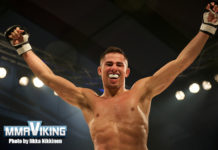