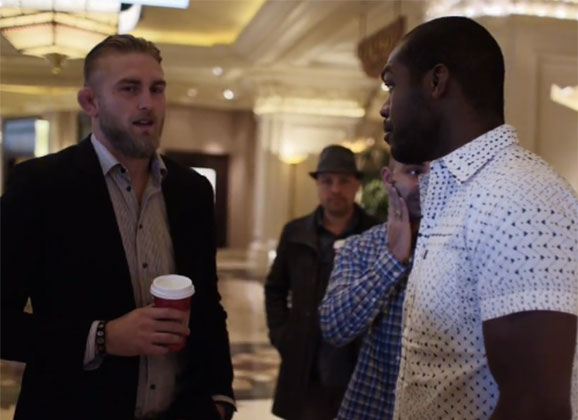 The UFC Road to the Octagon: Gustafsson vs Johnson has been released, and the footage has some exclusive behind the scenes action.  First is Jon Jones talking to Alexander Gustafsson at the “Time is Now” press conference in Las Vegas.  “You are too versatile for him” starts out Jones, after the two shake hands. The two continue informally discuss The Mauler’s match against Anthony Johnson, where they agree Rumble fades after the first round.  “Come in good shape, and you will beat him” says Bones to conclude their chat –see 4:10 of the video for conversation.

“It’s Anthony Johnson and nobody else” says the Swede that says he is only focused on this bout, and not the opportunity to step in for the light heavyweight title.  “I can’t wait to fight him”. Gustafsson is now just one week away from facing American Johnson in front of 30,000 fans at the Tele2 Arena in what will be Europe’s biggest UFC event.

“In my mind I won the fight” says Gustafsson looking back at his shot at the title. “I am going to beat Anthony Johnson and I am going to get the chance Jon Jones again, and I will make sure to finish him”.

Gustafsson also talks about the loss of his father and his injury taking him out of his planned title fight, which was taken by Daniel Cormier. With Johnson coming on top of the recent UFC 182 headliner, he is expected to face the winner of Gustafsson and Johnson.

Johnson is shown training with former champion Rashad Evans at the Jaco Center in Florida. The recovering Evans is working on more grappling and wrestling. The former welterweight brings in taller sparing partners to help simulate Gustafsson’s reach. “My style is Anthony Johnson’s kryptonite” comments Gustafsson on Rumble.

Gustafsson’s training partner at Alliance Phil Davis is also shown as he prepares to take on another wrestler in Ryan Bader.