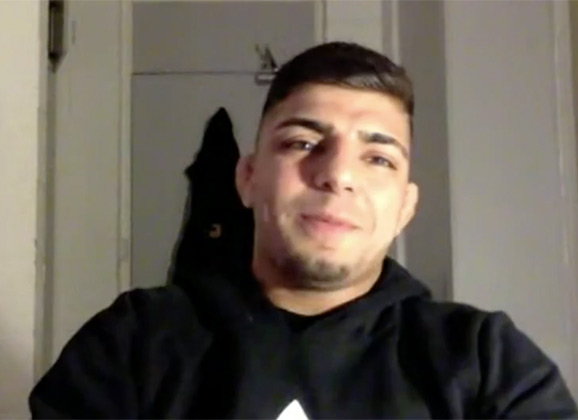 Sweden raised Amir Albazi is focused on MMA and it showed in his bout last Thursday in the Czech Republic as he took his record to 6 wins and 0 losses. “There are so many emotions before and after” says “The Prince” as he recalls his first round TKO over previously undefeated fighter local fighter Ondrej Moravec at the Arena Sparta event.

“The atmosphere was crazy. I felt like the old Pride.” says the 21 year old about the fireworks and big promotion. “I thought they were going to boo me, but they cheered me.” says the London Shootfighters athlete.

“I will try to do at least 2 or 3 in the summer. I am in shape and always training” says Albazi who wants to be busy.

“I looked up and still look up to the guys like Nico Musoke and Diego Gonzalez. They came from the same places and same background. It is a big motivation for me. If they can do it, I can do it.”

The BJJ World Champion talks about getting free tickets to Superior Challenge back in the day to see the popular MMA events in Stockholm before the UFC arrived. “It was even better than my birthday” says Albazi that was able to watch his heroes.