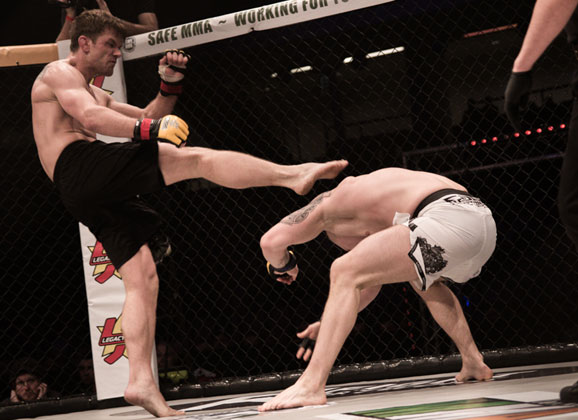 Finn Jussi Halonen and Dane Frodi Vitalis Hansen battled it out on Cage Warriors 66 undercard Saturday night, exchanging take-downs early, but it was the ending of the fight still leaves much discussion. Vitalis got another takedown at the end of the round, but as the Finn that was escaping and on his way up was kicked in the head. It ended up being the end of the fight. The ref deemed the kick to be an illegal blow from kicking the head of a downed opponent. It was a razor close call by the referee, that ultimately gave Halonen the win. MMAViking.com talked to both fighter shortly after the bout for their perspective on the stoppage.

“I was sure I had a win” says Hansen who celebrated after rocking his opponent. It was a technique that the fighter has been practicing. “I”m very disappointed” says the Dane about the ultimate decision that will end up as a loss on his record. “I have to see it again”

“Where I come from it’s a loss” says the Finn about what is an official win. “I don’t remember what hit me” continues Halonen. “If he wants we can do it again”