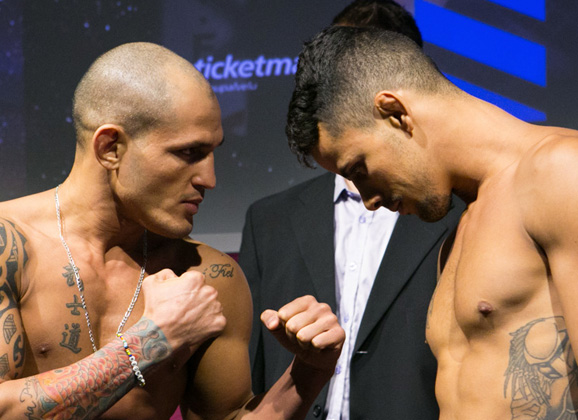 Fight starts with the spanish fighter throwing punches and kicks. After a while Marquez shoot for a double and finaly gets it however Repo manages to reverse and end up on top.

Repo working from top half guard. Repo passes to side control and manages to keep Marquez down quite easily. Repo progresses to North-south and keeps punishing Marquez.  So far Repo has been controlling the fight.

Spanish fighters start the fight throwing strong punches and kicks which reach their target. However Repo manage to throw amazing counter knee and knocks Marquez out! its over by TKO. 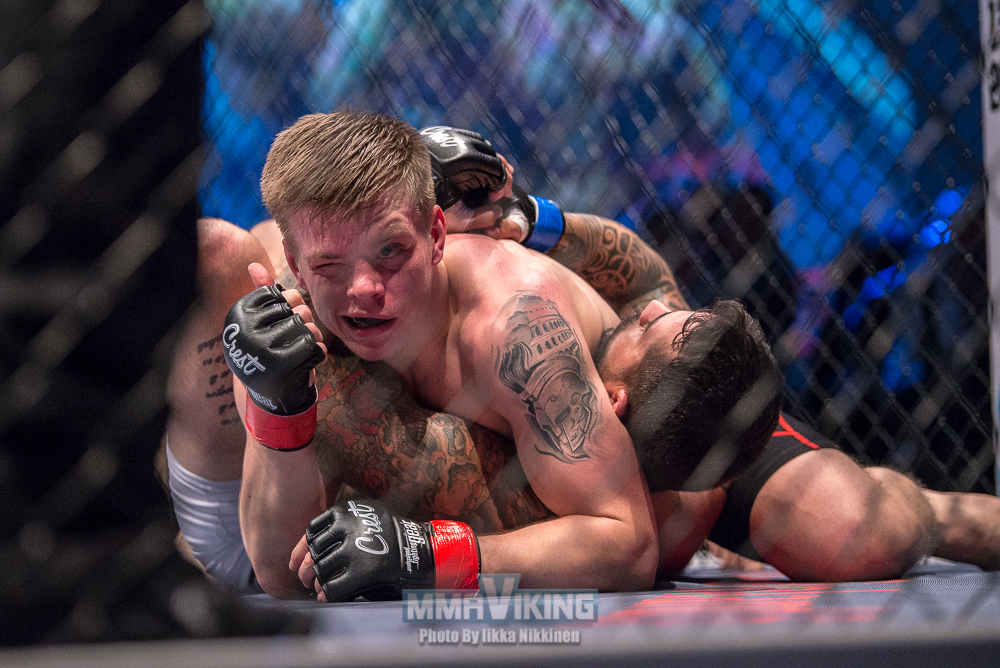 Mikko Ahmala (Finland) vs.Yannick Carriere (France) -80 kg
Round 1 : Both fighters move in and range is sought for, some high kicks are exchanged, Ahmala gets taken down but scrambles and gets a top position in the half guard of Carriere. Mikko goes for a leglock and digs in deep for a heel hook, gets it and makes Carriere tap out! 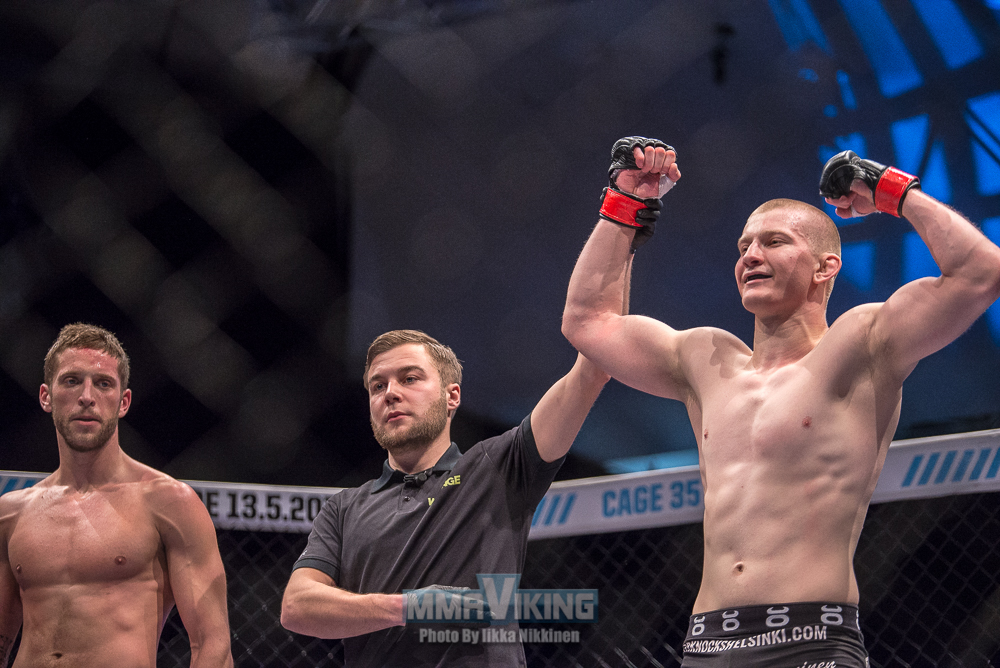 Round starts with vicious standup striking and kicking. Both fighters are seriously looking out to knock each other out. Salmimies’ face is already bloodied up. Salmimies most controlling the center of the cage. Borella incidates that there was a accidental eye poke and gets a  little bit of time to recover.Suvi scoring with nice lowkick. One minute left and Salmimies pushing on agressively. Borella definitelly not giving up and delivers her own barack of punches. Round 1 ends in clinch. Tough round for judges.

There is no hesitation in the beginning of this round. Both fighters are throwing heavy leather. Suvi controlling the center of the cage. Now there seems to a little break in action as both fighters take a breather and circle around the cage. Fight now in clinch. foot stomps by Salmimies. Borella rushes in and throws angry combination. Referee steps in to stop the action due to eye poke by Borella. Salmimies face is still bloodied up. Action is resumed. Salmimies punishing Borella but Borealla constantly striking back.

Immediatelly clinch position is reached and both fighters throwing knees to the opponens legs. Salmimies is still pressing on even she is often in the receiving end of punches when rushing in. This is going to be hard fight to call for the judges. Fight is back in clinch position when the bell rings and ends the fight.

Rasul throws a body kick but Joannes catches it and trips Rasul over. Rasul kicks from bottom and manages to get up. Fight is now back standing up. Bothi fighters showing tremendous handspeed with punches. Rasul shoots for double but gets caught in a guiljotine choke . Khataev slamming Joannes to loosen the choke. Khataev is out and now in Joannes’ full guard. Joannes ccontrolling Khataev with left overshook from bottom and therefore preventing Rasul to posture up. There is a short scamble and Joannes attemps for a armbar, but Khataev slips free. Khataev now in French man’s half guard. Joannes manages to restore full guard. Rasul throwing short punches from top. Fight ends. Highly likely this round goes for Khataev.

Joannes ignites the round with excellent kick and follows in with a solid punch. Khataev scores a takedown but gets caught in a arm bar. it’s tight. Fight is over! 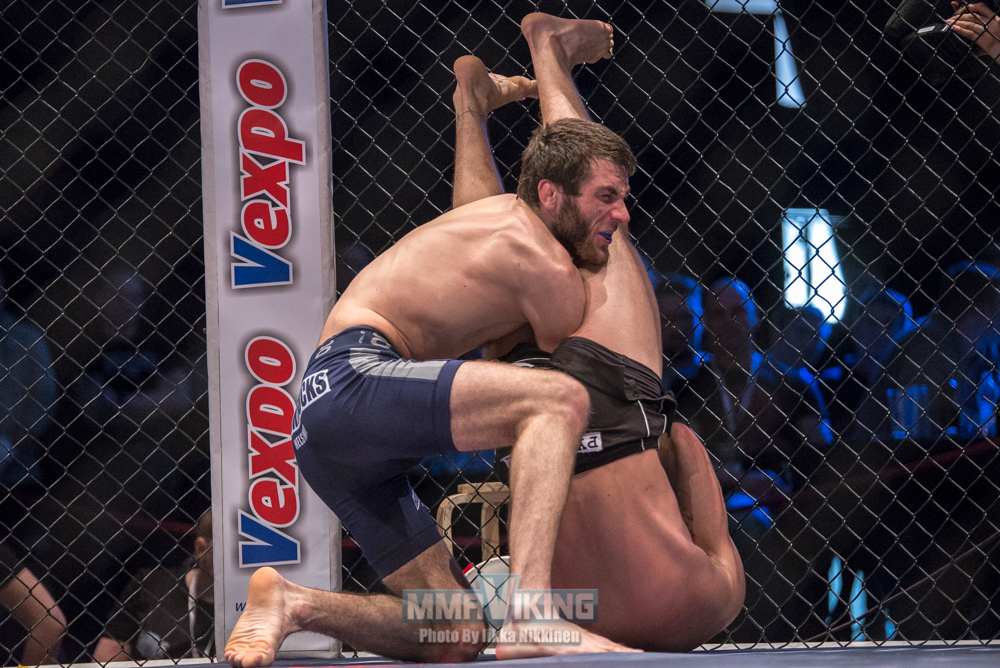 Sharp striking. Both fighters scoring points with punches. Clinch is established Nyyssönen being against the cage. Nyyssönen manages to reverse the position for a short while. Burkot attemps a single leg takedown but Nyyssönen scrambles on top. Fight gets back to standing up but Burkot does a text book double leg takedown and ends up on the closed guard of Nyyssönen. Nyyssönen takes tight triangle and Burkot is in trouble. Burkot taps to triangle! 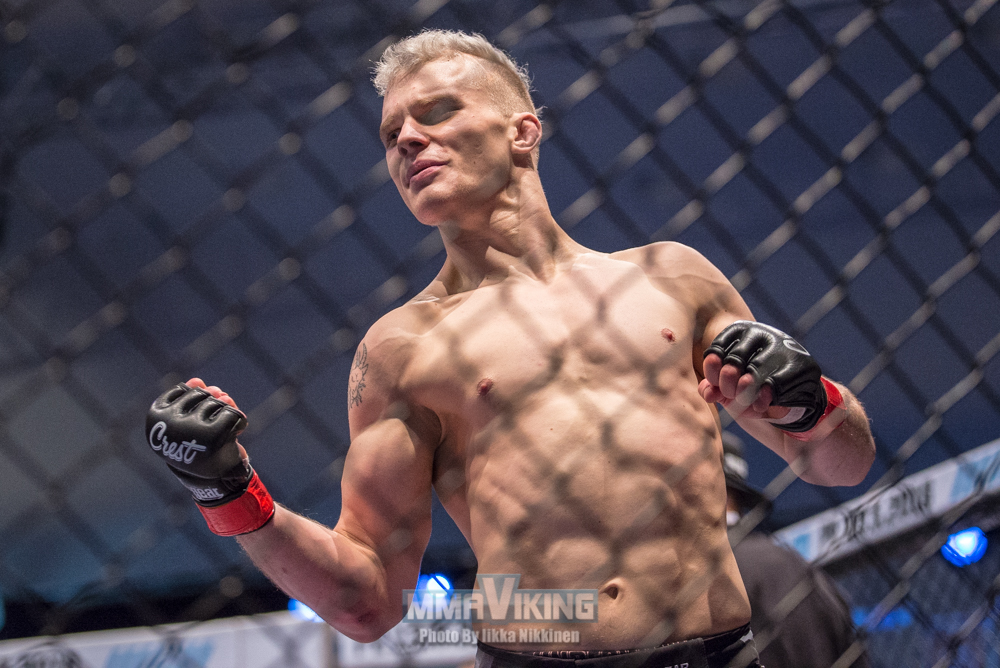 Jussi Halonen (Finland) vs. Håkon Foss (Sweden/Norway) -77,1 kg – CO MAIN EVENT
Round 1 : The evenings first and only “real” viking vs. viking bout kicks off and both fighters rush in and some punches and kicks get exchanged. Halonen lands a nice kick but it’s Foss that after some movement and swinging that stuns Halonen and gets the fight to the ground, takes a dominant position and rain down punches over a covered up Halonen until the referee stops it. 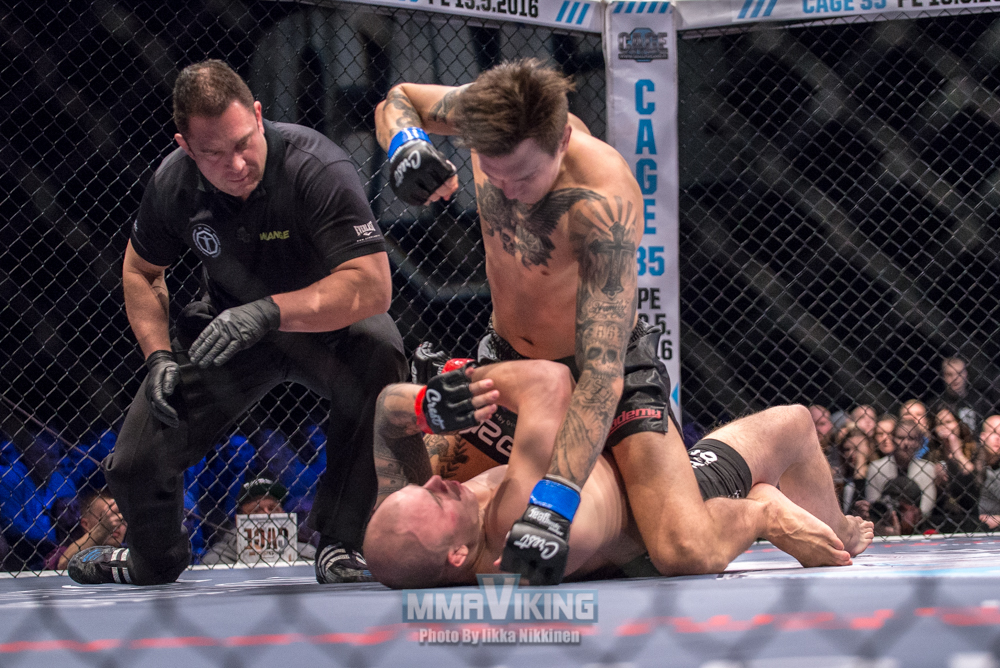 Rafael Domingos (Brazil/Finland/USA) vs. Rafael Macedo (Brazil/Sweden) -65,8 kg – MAIN EVENT
Round 1 : The Brazilian viking main event starts off with both fighters moving around the cage and throwing some legkicks. Domingos lands a very hard hook in an exchange that sends The Butcher to the canvas, like a predator Rafi jumps his prey and locks in a very tight guillotine and at 3:51 he has forced Macedo to tap.

Winner: Rafael Domingos by Guillotine choke at 3:51 in the first round. 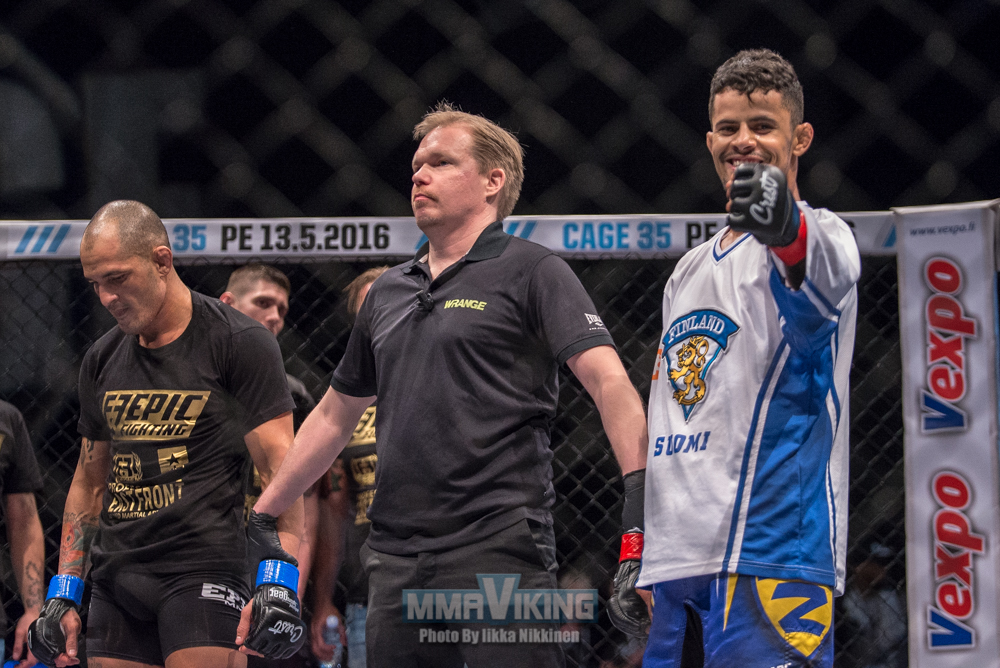