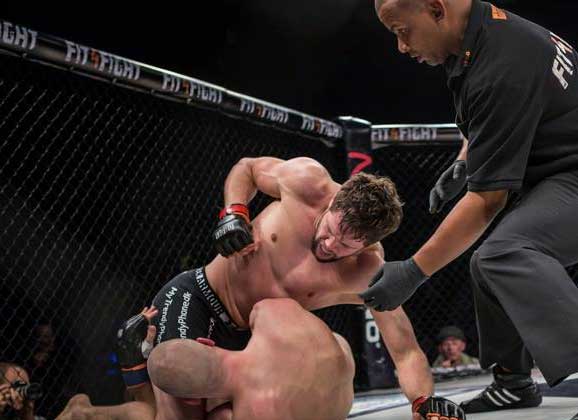 MMAViking.com is live tonight at the Brøndbyhallen in Denmark for European MMA 6 (EUMMA 6). The Dane-versus-Dane matchup of Nicolas Dalby and Morten Djursaa headline the card, with Danish Olympic wrestler Mark O. Madsen also making a debut. Swedes send two of their best in Nico Musoke and Andreas Stahl. Also, Danish fighter Christian Colombo will get his chance at the heavyweight title.

Click on the top Unibet banner above for a huge sign-up bonus and betting odds on tonights card! 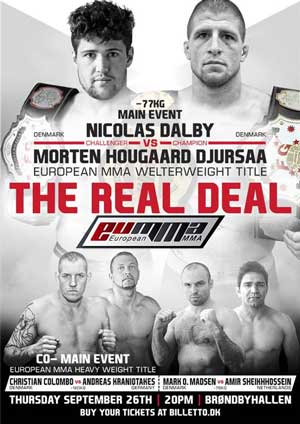 For an event preview, check this out.

ROUND 1:
Brunell  pushes the pace from the start and connects with a quick right. Brunell shoots in and takes down Sredanovic. Brunell passes Sredanovic’s guard  with ease and sinks in an anaconda choke. Sredanovic has no option but to tap.

ROUND 1:
Madsen quickly grabs a hold of Henze with a body lock. Madsen lifts up Henze and slams him down to the mat, landing in side-mount. Madsen rains down huge hammerfists. The referee looks closely but doesn’t step in. Madsen steps into half-guard and continues to ground and pound. The referee has seen enough and steps in.

The fighters touch gloves and meet in the middle of the cage. Djursaa clinches and pushes Dalby up again the cage. Dalby seperates and attacks with a flurry of punches. Dalby fires a signature highkick, only hits air. They clinch up up again. Djursaa lands a knee to the body that drops Dalby. They stand and clinch again. Dalby lands a clean left hook and drops Djursaa. Dalby pounces on Djursaa and begins to ground and pound before the ref jumps in to save Djursaa.

ROUND 1:
The fighters come out swinging. Dimitrov initiates the clinch but Ståhl reverses the position and pushes Dimitrov up against the cage. Ståhl looks excellent as he clinches up Dimitrov and lands a flurry of knees and uppercuts that drop Dimitrov. Dimitrov turtles up and Ståhl starts to lans big shots. The referee has seen enough and steps in.

ROUND 1:
The fighters touch gloves.  There is no feeling out process here as Imagov fires away with punches in bunches. Bak shoots in and takes Imagov down and lands in side-mount. Imagov regains half-guard. Imagov gets to full guard and tried to shut down Bak. Imagov sweeps Bak and the fighters are back on their feet. Bak shoots in, but Imagov quickly defends and is pushed up against the fence. Imagov tries to hip toss bak, but lands on the bottom. Bak advances to full mount and starts to rain down elbows. Bak thows more strikes from top position while Imagov desperately tries to defend himself. Imagov is saved by the bell.

The fighters feel eachother out. Imagov lands a nice straight right. Again Imagov with a beautiful one-two combination. Bak initiates the clinch and forces Imagov up against the cage. The fighters seperate. Again Bak shoots in and cliches Imagov up against the cage but Imagov seperates. Imagov with a nice left hook. Bak answers and takes Imagov down and lands in half-guard. Bak starts to land some nice elbows and hammerfists from half-guard. Bak passes and gets to side-mount and starts to throw short elbows and punches. Bak get the mounted crucifix bit Imagov quickly gets back to side-mount. Once again Bak is in full mount, but Imagov is saved by the bell once again.

The fighters meet in the middle of the cage. Bak shoots in again and takes down Imagov. Bal spins around and takes back of Imagov. Bak sinks in the rear-naked choke and Imagov is forced to tap.

ROUND 1:
The fighters meet in the centre of the cage Formo cliches up and lands a flush knee. Becker goes down and Forma lands some cleans shots. The fighters are back up. Becker takes down Formo but Formo stays active. Formo tries for a quick armbar but Becker sees it and gets out. Formo throws up a triangle and sinks it in. Becker is forced to tap.

This fight will NOT happen. Guldbaek injured his hand today, and will not  be able to fight.  This was relayed to the MMAViking.com team on location.