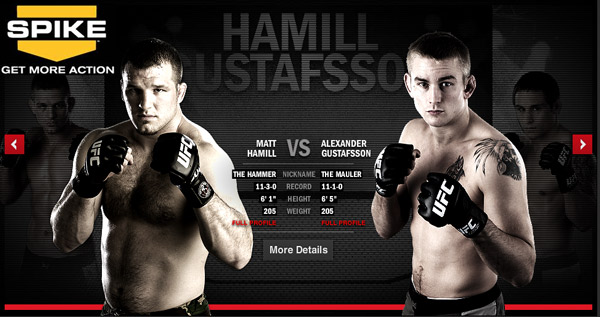 With all the changes’s at UFC 133, the dust has settled and Swede Alexander Gustafsson (3-1 UFC) and Matt Hamill (9-3 UFC) will air on Spike TV.  Although Gustafsson’s original opponent, Vladimir “The Janitor” Matyushenko has been injured, the Mauler’s new bout will remain on the “UFC Prelims”, which air live prior to the main card now called “UFC 133: Evans vs. Ortiz II”.

The Swede’s bout could have made a jump to the main card as the Antonio Nogueira and Rich Franklin co-main event was recently scrapped due to a “Little Nog” injury.  The Mauler’s bout however did not move into the main card slot.  The decision most likely was due to Spike’s preference to feature feature TUF alumni, and Hamill is one of the better known names coming out of the reality program.