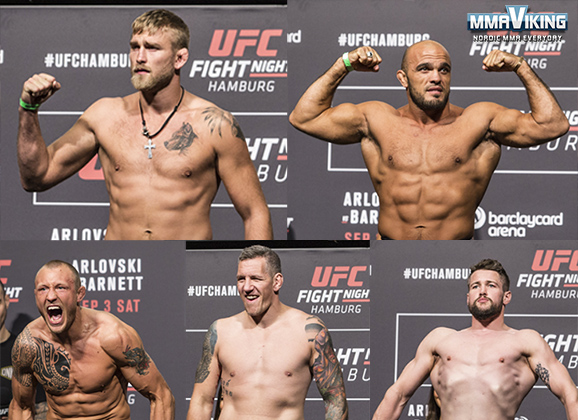 The UFC Fight Night 93: Arlovski vs. Barnett event takes place today at the Barclaycard Arena in Hamburg, Germany. Nordic fighters are throughout with Alexander Gustafsson and Ilir Latifi on the main card, with Nicolas Dalby, Christian Colombo, and Jack Hermansson on the prelim card. 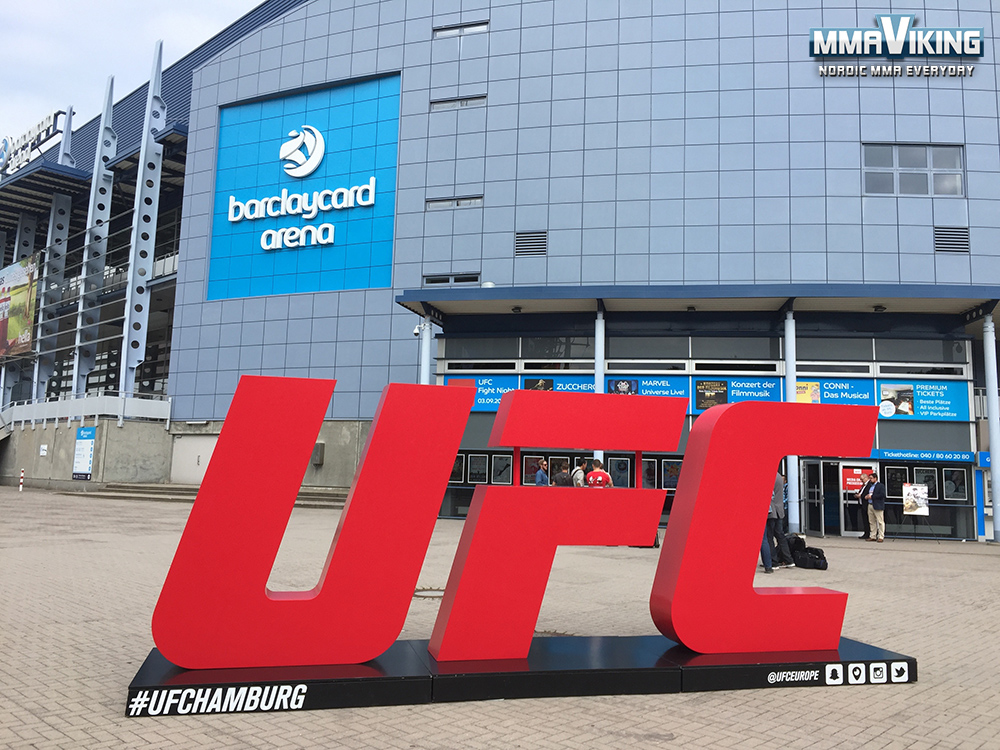 Scott Askham vs. Jack Hermansson
Round 1
Jack starts with a lot of movement and some nice oblique kicks to Askhams lead leg, both fighters move around a lot looking openings. Hermansson shoots in for a takedown but they end up against the cage, they move back to the centre of the octagon where askham lands some shots. Hermansson lands a nice body kick but Askham returns with a nice legkick and then lands a supermanpunch, they end up in a clinch against the cage. As the Norwegian escapes time runs out.

Hermansson comes out hard and aggressive, landing some more oblique kicks and a nice body kick, he manages to cut the englishman over his eye. He lands a nice overhand right and keeps pushing forward, askham uses his kickboxing to defend, Jack lands a nice right hook but doesn’t get the finish. A very good and even match up. Hermansson lands another nice clean uppercut and keeps landing more punches and elbows. Jack is really dominating this round, Askham tries for a heel hook but the time runs out yet again.

Jack is putting a good pressure and keeps using his oblique kicks to find the distance, takes askham down and they scramble for top position. Hermansson lands in a top position but ends up in yet another heel hook and footlock attempt that he calmly escapes. The fight moves up the standing and its Hermansson who keeps putting pressure, landing some nice knees to the mid section, landing uppercuts and pushing Scott out the cage. The Englishman is tired as hermansson keeps grinding on him with trips and takedown attampts. Both guys swings hard as the buzzer sounds leaving this one up to the judges, but this should be a unanimous decision in favor for The Joker in his UFC debut.

Christian Colombo vs. Jarjis Danho
Round 1
These to giants goes straight for each other, clinching up against the cage before starting to look for some shots. Colombo dodges a vicious overhand from the german but gets caught by a hard right that he takes. Some level change from Danho leads to them to the cage, Colombo looks for some knees and lands them. He keeps using his height and reach advantage looking for the guillotine,  Colombo lands a mean knee as Danho puts his fingers down to the canvas. It cuts danho badly on the head and Colombo gets one point deduction but the fight continues.

Colombo starts out with a good punch, a nice but short exchange against the fence. Danho stuns Colombo with a knee and he goes down, he defends well and gets up. The dane then lands another knee but Danho manages to escape a finish, these two tired heavy weights are really swinging with all power they have left. Colombo pushes but danho runs away as he has little power left, Godzilla keeps pushing but still eats some punches. Danho is cravled up on the canves as the time runs out with Godzilla standing over him landing some minor shots.

Danho eats a jabb right away and stumbles down but manages to get back up, Colombo is really coming out dominant again and keeps looking to land those knees to the head of the german. Danho is visibly tiredbut still manages to survive, Colombo keeps forcing Danho to move around a lot using his nice Muay Thai skills. Colombo seems to slip and land on the bottoim but they get up, Danho sends away a short flurry of strikes in what could be his last attempt to finish this fight but Colombo isn’t moved by it and clinches up. The final seconds a very gritty and the time runs out.

This fight ends up in a majority draw after Christian Colombo having one point deducted due to an illegal knee.

Round 1
And its on, neither one off them are wasting any time and closes the distance, Dalby walks in and gets caught by a nice teep. Dalby gets caught again with a right upper cut and goes down with Sobotta coming after and starting to hammer away and cutting Dalby underneath his eye, Nicolas manages to pull guard and escapes the flurry of punches. Both fighters stay on the ground battling for positions with Sobotta still on top of Dalby, the Dane is defending good on the ground but peter still manages to take the back looking for the rear naked choke but Dalby stays in the game as the time runs out.

Dalby comes out hard and as Sobotta throws a jab Nicolas stretches his arm out that ends up in a accidental eye poke, the fight is stopped but continues after a short stop. Sobotta catches a kick from Dalby and takes him down, after a short fight some better positions Dslby ends up on the bottom again with Peter Sobotta putting some hard pressure on him with punches and a shoulder pressure. Both fighters show a lot of patience when struggeling on the canvas, Dalby holds a tight half guard as Sobota struggles to improve his position as the this round comes to an end.

The final round is on the way and both fighters keep their distance, some smaller shots from Dalby as they move around, as fast advancement from Dalby lands them in a clinch and Dalby gets a elbow in the separation. They clinch up against the cage again but Dalby gets away and keeps the fight standing again. Sobotta gets a nice takedown, a failed sweep attempt from Dalby eventually lands with Peter on top but Dalby scrambles to his feet for the final 15 seconds. Sobotta shoots in for a final takedown attempt that Dalby defends nicely and the final round ends.

Ryan Bader vs. Ilir Latifi
Round 1
And here we go, much movement from both fighters as they size each other up, some minor jabs fly as they look for the distance. Badet lands a bodykick that takes some air out of Ilir but no harm done, a double takedown attempt from Latifi but Bader slips out. Ilir throws some overhand rights that lands on Baders shoulder but in the final 15 he he lands a hard right hook that sends Bader down but hes unable to finish.

The Sledgehammer lets some overhand rights fly and Bader quickly moves away, Bader shoot in but Latifi defends and gets a headlock. They get back up for a short moment of clinch against the cage before moving back to the centre of the cage. Bader lands a nice right hand and follows it up with an elbow. At 2:54 Latifi shoots in for a takedown after a faint by Bader, Ilir gets hit by a brutal knee that knocks him out cold.

Ilir Latifi loses by KO at 2:06 in the second round.

Jan Blachowicz vs. Alexander Gustafsson
Round 1
Some fast jabs are thrown, Jan kands a overhand right. It continues with some jab exchanges a quick clinch to the cage, both fighters give and take. Some clinch up and some punches and knees, JAn works with his jabs. Alexander gets pushed but turns it around against the cage and lands a takedown, defends a armbar attempt with some nice hip movement. Alex on top in the full guard, landing some punches and some nice elbows. Gustafsson has a very calm and good ground control.

The polish comes out with some hard jabs that Alex dodges nicely and scores another nice takedown. The Mauler starts to maul Jan with well timed elbows and strikes on the ground, tries to improve his position but Jan quickly gets him back in his full guard. The Swede keeps landing cutting elbows that draws blood and puts a good pressure and controlling the movement. The final minute of the round is all Alex, he stands up and looks for a better way in and as he dives in he lands a nice right hand on the chin of Jan but the time i up.

JAn comes out trying to land bombs but Alex moves nicely with great footwork, he lands a beautiful right hand. Alex is looking more loose and confident as the time goes on and lands another good takedown with him landing on top in the polish full guard. The Swede keeps working methodically with punches and some elbows, every moment that Alex gets his arms free he lands another strike at will. After some time the referee makes them stand up with 90 seconds left only for Alexander to score another takedown, Jan is starting to get very tired as Alex manages to posture up and put his body weight behind the punches and elbows. The fight goes the distance leaving it to the judges scoring cards but it was all Gustafsson in the second and third round.