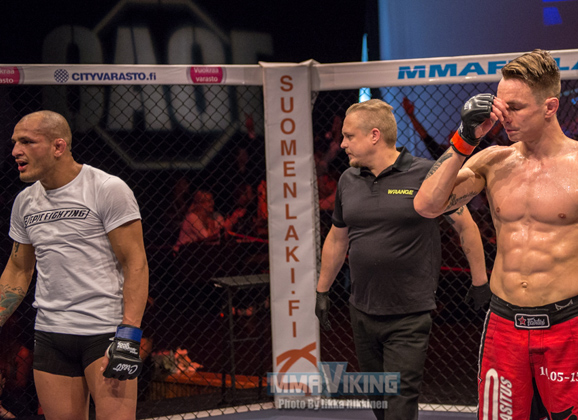 The Finland MMA Federation (Suomen Vapaaotteluliitto) has come back with a decision regarding the protest filed after the Cage 32 headliner between Joni Salovaara and Rafael Macedo, and currently the bout stands as a “no decision”.

The bout was declared as a win by majority decision for the Finn when announced inside the cage. However, the result was immediately protested by the Sweden based team that saw a clear round one and three in favor of their Brazilian fighter.  The overturned result was posted on the federations website and on Facebook late last night. 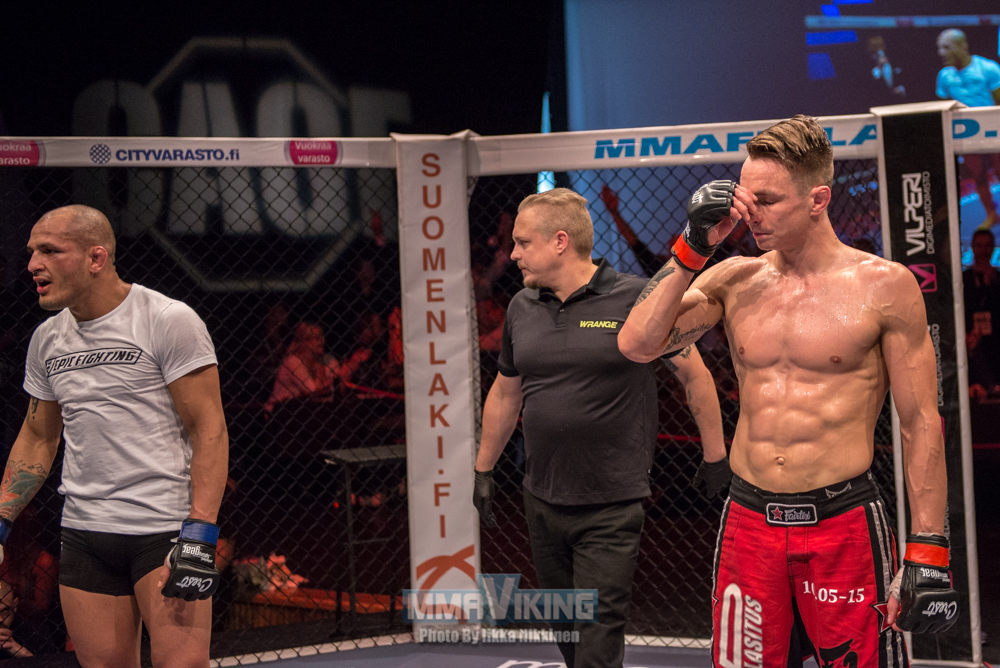 The process for ending in a no decision was an interesting multi-step process that has left the Macedo camp unpleased to say the least.

MMAViking.com’s interpretation of the protest review process from the information shared from the federation, went like this :

First, three judges (that did not score the bout originally) watched video of the fight. After watching, Lassi Minkkinen, Tomi Tervanen and Patrick Lundquist all scored the much debated round 3 in favor of Macedo 10-9.  Under the criteria of the unified rules, the three all agreed that the Swedish Top Team (recently changed to Epic Fight Club) fighter won the last round and the bout.  There were no disputes in the first step, as all judges saw the fight in favor of the Brazilian.

BUT, there were two more stages to the protest review process.  The federation watched the video of the fight and then took into consideration that the referees all scored the fight for Macedo.  They first voted if the win for Salovaara needed to be amended or not.   A “majority” of the group agreed that a change needed to be made in the decision.

The final step was for the board (the specific names of those that voted were not documented) was to vote as to whether the decision would be changed to a no decision or a victory for Macedo.  More than half of the group then voted for the no decision, leaving the current status as a no decision.  But, the Macedo camp will try to protest the protest.

Rafael Macedo comments to MMAViking.com :
I am very disappointed with all this, I prepared a lot for this fight, diet, train hard every day and knew it would be a tough fight but I did my job as must be done to win at the end of the fight everyone expected my victory the public and even the opponent conceded defeat. when they do wrong decision they not only hurt me but everyone involved, my family, coach, friends, and the image of MMA it makes me think that when I’m fighting away from home I must submit or knock out otherwise will be stolen … in my fights I never needed decision to win but if I need as was this case I want justice to be done, I dont want to believe it will always like this, I know I’m just starting in MMA but things like this discourage an athlete, the best time they took me was my victory in CAGE and now they judge as ND, cant accept this.

“I heard that there is no corruption in Finland and I want to keep believing it.” – Macedo

Coach Magnus Strander comments to MMAViking.com :
The federation agrees its a win for Rafael but refuses to give him the win. They change the result to “no decision”!!!??? Come on…
They protect their home fighter. I think when fighters hear about this they will think twice before fighting in Finland. I really hope there is some way we still can get this result right.

“I think its a shame for finish mma. I have always looked at finish people as honest and proud people, thats why i am so surprised of how this could happen in Finland.” – Strander

In the world of MMA, typical “no decision” results are reserved for fights where the winner is found in violation. For example, Nick Diaz’s submission victory via gogoplata over Takanori Gomi at Pride 33 is seen on Sherdog as a no decision because of his failed drug test.