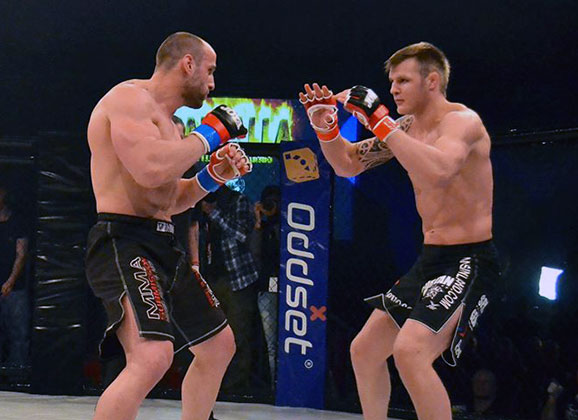 Denmark’s Valhalla is looking to follow-up their 2013 “Battle of the Vikings” event with another old-school, 8 man tournament resulting in a one man takes all winner of the night. “The audience liked the event and venue, and emphasized the completeness of the theme and the intensity throughout the evening as the best parts of the experience.” says Mohammad F. Tehrani, Valhalla organizer of Århus’ Colosseum that is planning the next event.

The last event crowned Volkan Oezdemir (Switzerland) champion of the 8-man tournament, who won three matches on his way to the under 100kg field. Finn Marcus Vanttinen was the only Nordic fighter in the tourney, and he was stopped in the first round by Angelier Benjamin.  In other non tourney action, Danes Damir Hadzovic and Nicholas Dalby were in mma “super fights”, where they were victorious over Nic Osei and Ivica Truscek respectively.

Now fighters such as Norway’s Thomas Formo and Denmark’s Søren Bak and Rhassan Muhareb are planning to get on the card. “We are targeting late ’15 or early ’16 for the next Valhalla. We’d like to focus on Danish and Scandinavian fighters this time around; both for the added local interest and for the sake of the Scandinavian MMA- and combat sports-scene.” says Tehrani.

The promotion is first focusing on a 155 lbs. tournament this time around. “We see the ~70kg class as full of rising stars and possible future contenders. Dream-participants would include Damir Hadzovic, Ayub Tashkilot, Fernando Gonzalez and more. But we know it takes a lot to participate in an 8-man tournament, so we are eagerly awaiting contact from potential fighters!”

“We are proud that we had part in the fast rise of Volkan Oezdemir, Nicolas Dalby and Damir Hadzovic – we want to brew up the next batch of knock-out artists as well!” says the organizer, that still hasn’t ruled out additional weight classes for the next event.  “We are thinking over multiple weight classes, also, this would open up the opportunity for last years heel, David Round, to make a re-appearance.”