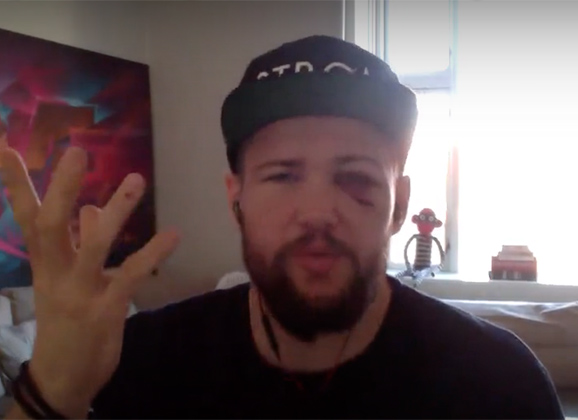 Nicolas Dalby (14-2-1) was set on rebounding from his recent loss to American Zak Cummings and show his fighting spirit Saturday night in Hamburg, and even in a loss… he did just that.  At 53 seconds into the fight, opponent Peter Sobotta landed a huge right hand that dropped the Sharpshooter. “I remember falling on my back and my eye hurt like a bitch.” says the Dane to MMAViking.com. “Usually when I fight, I don’t feel pain, but that I felt. My eye is broken I thought.”

“Should I tap out?” thought the welterweight fighter as he felt immediate pain.  As he found out after the fight in the emergency room, it was indeed a broken orbital bone.  He also needed six stitches to close the cut, but neither the break or the cut stopped the Rumble Sports fighter from fighting off his back and getting to his feet looking for a way to get back into the fight over the next 14 minutes of the bout.

“It took me some time to regroup my strength” continued the welterweight about his ability after getting dropped.  “Double vision the rest of the fight.” In the end, it was a decision versus the grappling ace with scorecards reading 30-26, 30-26, 30-26.

“If they are thinking about cutting me, I hope they give me another chance” says Dalby now that now has two consecutive losses, following his entertaining draw versus Darren Till back in October. “I was only 75% last fight and this fight 90%. I want them to understand why I can’t give the best performances.” comments the Dane that has had personal issues that have limited his performances in the Octagon. “I feel I have more to show.”

The 31 year old got some attention from the gay and lesbian community as he wore a UFC shirt supporting the gay community with the rainbow colors. “It was a good opportunity to show my support” says the Dane about the choice at weigh-ins.

Dalby also gives some background into his decision to also give the German based fighter a marshmallow during weigh-ins. Watch the full video below!