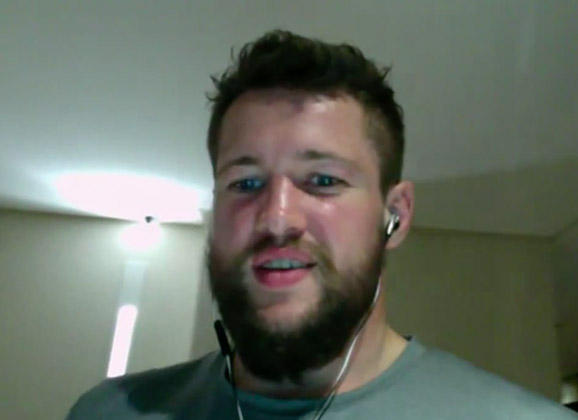 MMAViking.com talks to Nicolas Dalby 24 hours before his UFC debut at at Goiania Arena in Brazil. The Sharpshooter talks about his rituals the night before his fight, which may include watching the movie 300 and will include visualizing the fight. You won’t find a more relaxed fighter heading into the biggest fight of his career.

“We have a large crew.” says Dalby that doesn’t have a second alone as he is followed by his friend, coach, plus Danish press following his every move with journalists focusing on producing a radio documentary and newspaper stories, plus a video documentary. “It’s nice to have people around. We just hang out and are having fun relaxing.”

“I’m not used to hanging around these people” says the Dane, that also finds himself part fan and part fighter participant as he is in between many popular fighters and MMA personalities. King Mo on my left and Din Thomas on my right comments Dalby from the fighter hotel lobby in Brazil.

“I really had a great training camp. No excuses if I lose.” comments the Rumble Sports fighter that talks about previous distractions while in the Cage Warriors promotion.

“I feel I will represent Scandinavia in the cage tomorrow. I feel your support even if I am 10,000 kilometers away.” says the Dane that will soon be only the second from his country to step into the Octagon.

For viewing timing and live results.