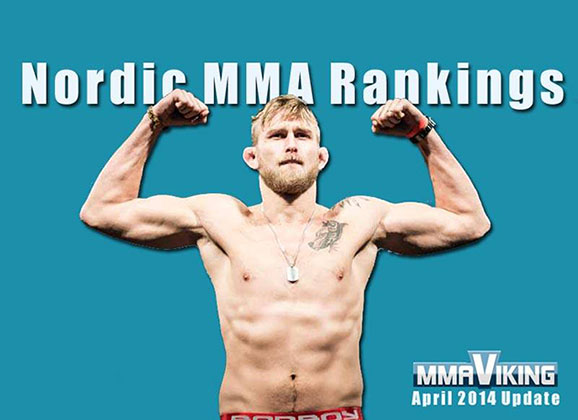 MMA Viking’s Official Nordic MMA rankings have been updated once again. This is the first update of 2014. We have taken into consideration all recent events including UFC, Bellator, Cage, Fight Festival, Superior Challenge, IRFA, European MMA, GCE, Cage Warriors and many other shows.

Summary: Nordic heavyweight division is still thin in number of fighters, but the top three will be back in action shortly.

Denmark’s Christian Colombo (7-1)  has gone 5-1 during last twelve months. At European MMA 6 in September the Dane took a dominant decision win over German vet Andreas Kraniotakes (17-7). Colombo is set to fight at EUMMA 9, but no opponent has been announced yet for the Dane.

Mohammad and Golcic will face each other at the Superior Challenge X on May 3rd in Helsingborg, Sweden.

Summary: Sweden’s superstar Alex “the Mauler” Gustafsson is in a league of his own at the Nordic light heavyweight division. The Swede extended his string of impressive performances at UFC London where he send British striker Jimi “Posterboy” Manuwa to oblivion with strikes in the second round.  The Mauler is now in a holding pattern as he has secured his shot later in the year at the UFC belt.

Sweden’s Ilir Latifi made his second appearance in the UFC on the promotion’s UK show eleven months after his debut in Stockholm. Latifi put French veteran Cyril Diabate on his back and finished the job on the ground with the Latifi choke at three minutes of the very first round.

Marcus “Caveman” Vänttinen’s defended his Cage light heavyweight title for the third time in 2013 in November’s Cage 24 where the Finn won a decision over Brazilian Charles Andrade. Vänttinen was set to fight at Cage 25 in February but was forced to cancel due to an eye injury that he suffered while training with Gustafsson and Latifi in Stockholm.

Swedish brawler Matti Mäkelä stays at 4th spot with latest win from Superior Challenge 9 where the Swede knocked out Italian Matteo Minonzio in the second round. Experienced Mäkelä is currently riding a three fight win streak. Mäkelä will fight 5th ranked Joachim Christensen at Superior Challenge X in May.

Danish BJJ black belt Joachim Christensen won his last fight in February at EUMMA 8 by decision over German prospect Stephan Puetz.  20 year old Swede Karl Albrektsson just won at IRFA 6.0, and is a rankings contender to look out for in the future.

Summary: The top five middleweights are close bunch so a single win or a loss can shuffle the whole list.

Danish tank Mikkel Parlo takes the lead with a win at Bellator 115 on 4th of April. The Dane dominated American Johnny Cisneros for three rounds and took home a a decision win.

Umeå’s Tor Troeng drops a spot due to inactivity. The Renyi gym fighter is 1-1 in the UFC with a submission win over fellow TUFer Adam Cella and a decision loss in a fight of the night versus Brazilian vet Rafael Natal at UFC FN 28. The Swede was supposed to fight at UFC 171 but shoulder injury pulled him from the fight.

Magnus Cedenblad is returning to action at UFC Berlin in end of May against undefeated Krzysztof Jotko. Jycken won his second UFC bout by submitting Jared Hamman in the first round. A win over Jotko in Berlin would lift Cedenblad to the top spot.

Sweden’s Mats Nilsson made his UFC debut on the London card where he faced UK’s rangy Luke Barnatt. Nilsson showed off his improved striking early in the fight but Barnatt’s head kick sent the Swede crashing down late in the first round.

Max “Power” Nunes took another win after dropping down to MW at ProFC 53, Russia where the Swede TKO’d Boris Miroshnichenko in the first round.  Look for Nunes to seek a BAMMA middleweight title in the near future.

Icelandic fighting phenom Gunnar Nelson displayed his improved striking skills at UFC London where he faced Russian brawler Omari Akhmedov. “Gunni” started out patiently but suddenly stung Akhmedov with a explosive strike that sent Russian crashing down. On the ground Nelson displayed excellent top control while laying strikes on his opponent. The Icelander sealed the deal with a guillotine choke near the end of round one. Undefeated Nelson is now 3-0 in the UFC.

Martin Kampmann has been fighting in the UFC since 2006 and is still considered as one of the better fighters in the competitive weight class. Kampmann has lost his last two fights in devastating fashion. The Dane is taking some time of from fighting but looks still to return to action in the near future.

Sweden’s Nico Musoke has done a brilliant job in the UFC and gone 2-0 in his first two fights. The Swede won a decision over Brazilian Viscardi Andrade at UFC Fight Night 36 in February. Next fight for Musoke has not been announced yet.

Denmark’s next welterweight star Nicolas Dalby fought Ukranian Sergei Churilov at Cage Warriors 66 in Copenhagen. Dalby sent Churilov to sleep with a devastating head kick in the fourth round and captured the Cage Warriors welterweight belt. It’s quite safe to say that we’ll see the Dane soon in the UFC.

Norwegian striker Mohsen Bahari is on the edge of the top 5 with a decision victory over Sweden-based Bruno Carvalho at Cage Warriors 66.

Dropped out: Reza Madadi for inactivity.

Summary: Finnish veterans fill the top five together with the Danish up-n-comers. There is serious potential in the contender section too we’ll probably see new entries to the top five in the near future.

UFC vet Anton Kuivanen moves to the lead as Madadi drops out due to not fighting for 12 months. The Finn was getting ready at American Top Team in Florida for a fight at Cage 26 in early April but unfortunately a rib injury sidelined the Finn for weeks. Kuivanen is set to fight next at Helsinki Fight Night in June.

Finnish veteran Juha-Pekka Vainikainen got back on track at Cage 25 where the hard hitting Finn knocked out Spain’s Pedro Morcillo in the second round, and took it up to the next level beating German TUF veteran Nordin Asrih at Cage 26 by decision.

New entry on the lightweight ranking is Denmark’s Damir Hadzovic who impressed at Cage Warriors 66 by knocking out UFC veteran John Maguire in the first round.

Finnish vet Niko Puhakka has healed from his back injury and returned to action in February at M-1 45 where lost by decision to high level Ukranian Alexander Butenko.

Dropped out: Joachim Hansen for inactivity.

Summary: Nordic featherweight division is a shark tank at the moment with an army of hungry young fighters working their way up the ladders.

Featherweight king Tom Niinimäki made most of his UFC debut as he surprisingly outgrappled the ADCC champion to a decision win. Niinimäki went 3-0 in 2013 with wins over Rani Yahya, Chase Beebe and Walel Watson. The Finn is currently training in Florida at Blackzillians gym where he sharpens his skills before the second UFC bout.

New Jersey based Akira Corassani’s bout with Maxico Blanco at TUF 18 Finale ended in the first round after a illegal knee strike from Blanco. Corassani takes another big step up in competition by facing Dustin Poirier at TUF ‘Nations’ Finale.

Niklas Backström crushed German prospect Max Coga with strikes in 15 seconds at Europa MMA in March. Next step for the undefeated Swede is probably signing with the UFC.

Summary: Hirvikangas and Tauru strengthen their position in the ranking with quality wins. Nordic bantamweight  is a competitive  division as there is tons of potential also in the contender section.

Finland’s Toni Tauru climbs to second place with an impressive performance at Cage Warriors 66. The Finn dominated Sweden’s Martin Akhtar on the ground and finished job with a rear naked choke late in the first round. Tauru has won his last nine bouts with last six ending to a submission.

Sirwan Kakai has been inactive since he lost to Taichi Nakajima at Pancrase 252 in September of 2013. Kakai, who splits his time between GBG MMA in Gothenburg, Sweden and American Top Team in Florida, will fight at the Zone 13 on April 26th next.

Finland’s Janne “Jamba” Elonen-Kulmala has been on fire lately and racked up four consecutive wins in six months. Latest victory came at Cage 25 where Jamba choked out Swiss Vinko Roditi in the first round.

Finnish flyweight prospect Mikael “Hulk” Silander won his last fight by Hulk smash in February at Cage 25 where the Finn’s powerful slam made Spaniard Tony Caizedo tap out in pain. Silander won again versus another Spaniard in Dani Barez at Cage 26.

Dropped out: Margaret Aase (Nor), Lina Eklund (Swe),  due to inactivity

Pannie Kianzad hovers at second place with a big win over Russia’s tough Milana Dudieva at Pro FC 50 in October. Undefeated “Banzai” will fight at Superior Challenge X in May.