Denmark’s Christian Colombo is set to take on German veteran Andreas Kraniotakes on the September 26 European MMA 6 card at the Brøndbyhallen in Denmark.  The promotion announced the matchup via Facebook today. 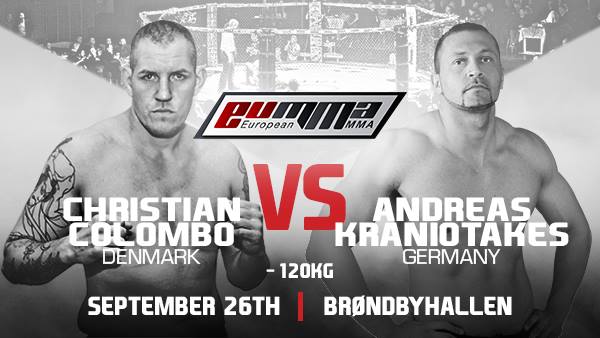 Colombo is ranked as the number 1 ranked heavyweight by MMAViking.com and has amassed a six win and 1 loss record. Godzilla’s last 5 bouts have been in the European MMA promotion, where he has won four out of five including his last four . His last decision was over Bjoern Schmledeberg in April, where he went the distance.

The “Real Deal” card is stacking the card with many of Denmark’s best fighters. The headliner is a headliner battle between welterweight’s Morten Djursaa and Nicolas Dalby, and veteran Danish fighter Mikkel Guldbaek facing up-and-coming Swede Nico Musoke.

The visiting Kraniotakes has an impressive 16 win and 7 loss record, with one draw. The 31 year old German is a true veteran, taking on many notable fighters such as Ricco Rodriguez and Tim Sylvia.

Big Daddy is a long time veteran of Cage Warriors, and likes to keep a busy schedule. The fighter has already fought three times in 2013, and is planned to face Dritan Barjamaj on July 6 in Germany at GMC 4.