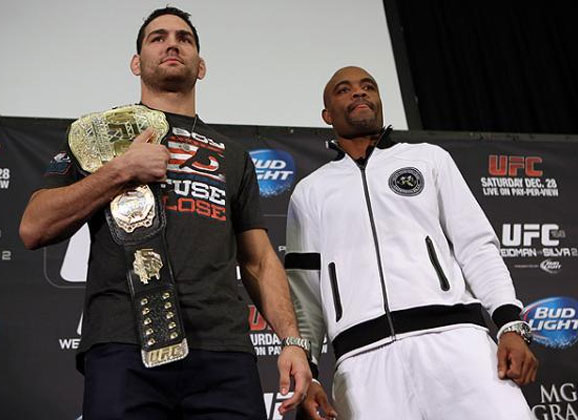 The rematch between Anderson Silva and Chris Weidman headlining Saturday night’s card is a tough fight to predict.  With no Nordic fighters on the year ending card, MMAViking.com reaches out to 17 fighters to see how see how they see the UFC 168 bout between the American champion Weidman versus the 38 year old former champ Silva.

Who Will Win? Get more pictures like this from SHERDOG.COM

Mohsen Bahari (Norway) : I hope Silva will win, but i think Weidman will take the victory. Weidman has Great grappling and wrestling and power in his punches, Silva has the upper hand in the stand up as long as he can stay fresh.

Bruno Carvalho (Sweden) : As I’m in Brazil, I can’t go against it Anderson for sure will play less n prove he can still beat anyone!

Magnus Cedenblad (Sweden) : Silva will win by TKO in round 2. He is the better fighter. Frank (Cedenblad’s dog, made famous by his appearance in the “Mitt liv som jycken” video blog) does not like Anderson’s clowning and hopes Weidman will beat him again, so Frank takes another TKO for Weidman.

Christian Colombo (Denmark) : I think Silva by ko and why coz it is Anderson f….. Silva the best p4p fighter ever

Timo-juhani Hirvikangas (Finland) : I think weidman will win, he is younger and more hungry, and i think weidmans Speed and reach is on par with silva.

Pannie Banzai Kianzad (Sweden) : I think that silva is to smart to play that game he did the last time against Weismann, I think he’s got more respect for him as a fighter. I’m rooting for Weidman but silva by tko in round 3.

Jorgen Matsi (Estonia) : Picking Weidman. Here is why: If Silva plays the elusive game of illusions and taunting again which he often does especially against grapplers then 1st fight will replay. If he is more urgent presses more and is more agressive then he is prone to being taken down and losing enough rounds or even being finished. I believe the Weidman grappling hype.

Mats Nilsson (Sweden) : I’ll have to go with Weidman for this one. I’m sure Silva won’t goof around as much as last time, but that’s still his style. Chris was able to exploit it once and is likely to do so again. We’ve seen it happen before where recently dethroned legends just keep falling… Weidman has got youth, hunger and motivation on his side. I think he’ll finish it in the second by TKO.

Max Nunes (Sweden) : I think silva will win 2rd tko. The first fight even though silva lost the fight other then the take down silva was just picking weidman apart. This fight wont be any different. Except he will get the finish.

John Olesen (Denmark) : I think Weidman has the tools and ability to win the fight but Anderson is a very dangerous fighter. I think Anderson is going to win this one on TKO round 4 or 5

Sten Saaremäe (Estonia) : Although I`m rooting for Chris Weidman, beacause he`s good wrestler, young and talented, but I think, Anderson Silva has been there so long time and he`s motivated and focused to get that belt back. So I think Anderson Silva will win.

Joni Salovaara (Finland) : Weidman – It is mentally easier for him than the first fight. He already did it ones.Now it´s his time to grind in to victory WIN via Decision for Weidman.

Simon Sköld (Sweden) : I think silva will have this fight, he is the best fighter in the division.
He will be hungry to take his title back and he will be looking to finish Weidman. Weidman is a great fighter but in this fight Silvia’s experience and determination to be the UFC middle weight champion ones again. My prediction is silva wins by ko in second round.

Ott Tõnissaar (Estonia) : I would put my money on Silva. If he is taking this fight seriously and aims to win, I believe, he still has more tools to dominate Weidman. If not, well, retirement is always an option. I think it will end by KO or decision.

Tor Troéng (Sweden) : Silva, because he’s the man with the masterplan! When he wins he will retire.

Besam Yousef (Sweden) : I will go for Anderson! I think he learned from his mistake and this time he will show what he is made of. Anderson is going to stop him

Frank’s (Cedenblad’s dog) pick for Weidman was not included in the tally. Of course, if you would like to make picks or bet yourself, click on the Unibet banner above.