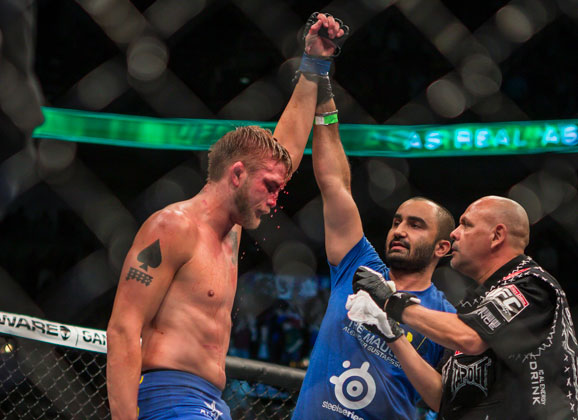 MMA Viking’s 2013 Nordic MMA Awards continue with the announcement of Gym of the Year. While just over a year old, it is Stockholm’s Allstars Training Center that made it big on the worldwide MMA scene with fighters excelling at the highest level in the world.

You don’t have to go much further than Alexander Gustafsson’s performance versus Jon Jones (Fight of the Year) to show the level of training that is coming out of the Sweden gym.  The Mauler outstruck and out-wrestled the most dominant light heavyweight in the world, and lost a decision which many saw going the Swede’s way.

But, the award is solidified with the impressive performance of several other Allstar Training Center fighters that had huge wins in the Octagon in 2013, including :

Not to mention the success of Niklas Backstrom, Jonatan Westin, and Michel Ersoy who also had unblemished records on 2013, Allstars was on fire.

The group of fighters have assembled after developing their skills at Nexus STHLM, HILTI Stockholm, Pancrase, and others to bring many of the Stockholm area fighters together under one roof.  The gym also has a fun atmosphere, and it showed early as in February the Harlem Shake fad took the team in a fun callout of the champion Jon Jones.

While listening to UFC TV broadcasts, you might believe the Eric Del Fierro is the head coach of Alexander Gustafsson, but it is Allstar’s Andreas Michael.  “The General” runs the camps and directs the Mauler’s fight preparations.  While Gustafsson developed his wrestling skills years at the San Diego gym and still goes for important sparing, more and more time of the Swede’s time is spent in Stockholm.

Not to be forgotten are coaches Muay Thai coach Joakim Karlsson and grappling/BJJ Alan ”Finfou” Do Nascimento. You will also find other pro fighters such as Gustafsson, Madadi, Carvalho, Cedenblad, Musoke and others heading up classes at the 1000 square meter gym.

2013 was also a breakout year for Finland’s Finn Fighters Gym.  Tom Niinimäki make his mark with a UFC debut win and Timo-Juhani Hirvikangas capturing the Cage belt.  Both fighters had 3 win and 0 loss years, as did Teemu Packalen.  Juho Valamaa also had a solid year winning three of four matches, fighting in Cage 21, 22, 23, and 24.