Katja Kankaanpää took on local Aisling Daly at the Helix in Dublin on New Year’s Eve. Kankaanpää (6 wins, 0 losses, 1 draw) fought Daly (13 wins & 4 losses) on the main card of Cage Warriors 51. Below is the play-by-play of the bout.

The prefight “this fight is important to me” says Kankaanpää about the catchweight bout. Katja is the first to enter the ring. The announcers are emphasizing that the Finn fighter is moving up to 120lbs, from the usual 115lbs, however in the pre-fight interview, Daly talks about dropping to 115lbs in 2013. Daly is coming off two losses, Kankaanpää looks to make it a third in a row. Daly getting a huge round of applause, being a local in Dublin.

Kankaanpää looks relaxed and smiles during the intro. Daly has her game face on and ready to jump into fight.

Round 1
Daly comes out with a knee and running straight at Kankaanpää. The two clinch, and Kankaanpää secures a body lock and pushes up her opponent against the cage. Kankaanpää is able to drag Daly to the ground, and Kankaanpää spins out of a triangle attempt into side control.

Katja Kankaanpää in total control and using elbows to the body and face for over a minute. The Finn is laying accross of the Irish fighter, but Katja looks for a headlock choke, but it’s not tight enough. Daly moves to the feet, but not before taking several knees to the face. Katja brings the fight back to the ground with a lateral drop. And a big round for Katja Kankaanpää.

10-8 round for Katja Kankaanpää (scored by MMA Viking)

Round 2
Again it is Daly moving forward, and the swing wild, and this time the Irish fighter pushes up Katja Kankaanpää against the cage, but Katja spins around to take control. Daly looks for a guillotine, but can’t get it. Kankaanpää in control again and has Daly around the waste, looking for a way to bring it to the ground. Daly trying to nuetralize the strong Finn, but can’t do it, and it looks like the Botnia Punishment fighter is just too strong.

Half way through the round, and Kankaanpää is back on top. Daly gets up, and the crowd cheers. Daly looks for a trip to take the fight to the ground, but it’s the Finn showing wicked wrestling with a lateral drop landing the Irish fighter to her back. The two scramble, and Kankaanpää looks for an armbar or an omoplata, but the two tangle up and eventually the fight makes the way back to the feet where the second round ends.

10-9 round for Katja Kankaanpää  (scored by MMA Viking)

Round 3
Kankaanpää just needs to survive this round to win. This round stays on the feet as the two look to exchange. The Finn isn’t rely on just wrestling, showing her standup and looking sharp with a jab, hook, and then a big headkick. The kick misses, but shows the well rounded game of the Finnish fighter.

Two minutes down, and the feet. And they say “MMA Viking” on the broadcast! OK, back to the fight. The round is two and a half minutes down, and the two are tied up. Again, the two battle up and down, and around the cage, but the two are equalizing each other. Katja’s wrestling skills are sharp, and even on the feet, Kankaanpää showing her skills. Daly trying to move forward and landing punches, but Kankaanpää is too strong. A knee drom Daly, but not enough from the local.

10-9 round for Katja Kankaanpää  (scored by MMA Viking) 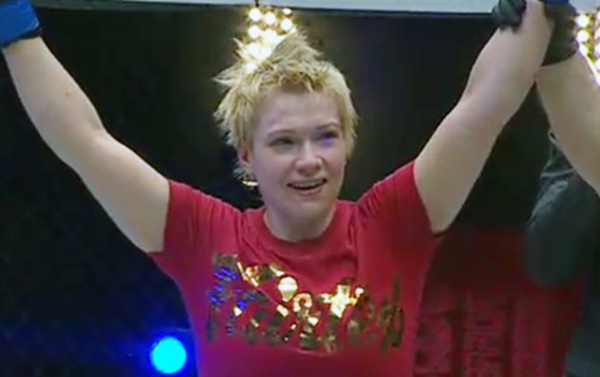 “It was a tough fight” says Kankaanpää in the post fight interview. “I’m so happy”.